Sometime in 2020 at the peak of the collapse of vehicular traffic into and out of the port city of Apapa, the Minister of Works and Housing; Mr Babatunde Raji Fashola opined that the lingering gridlock at the Apapa port area requires more than good road network for it to ease. 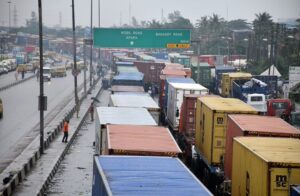 He pointed out that beyond roads, Nigerians must not lose sight of the fact that the ports which were built over 100 years ago, have been overstretched given the growing population of Nigeria and the facilities at the two Lagos ports.

The Minister was very apt in his observations, having been Governor of the state and now the Minister in whose portfolio covers road construction as well.

Apapa is very strategic to the economy of Nigeria, it is linked to the rest of Lagos by two major highways; the Apapa – Oshodi expressway and the Western Avenue (Funso Willaims Avenue). Of course, it can also be approached by water from Mile Two (on the mainland) and Marina (on the Island).

The fact is that, approaching Apapa from either the Mile 2 axis or Funso Williams/ Ijora axis has been a nightmare for years.

What is happening in Apapa is not unexpected, given its privileged location as home to Nigeria’s two foremost ports which are currently being managed by nine terminal operators. Between the two ports (Lagos Port Complex and Tin Can Island Port) more than 65 percent of dry cargoes and about 90 per cent of the nation’s liquid (petroleum products) are handled. This is because it hosts about 45 tank farms (and still counting). These are in addition to the many banks, shipping companies/agencies, licensed customs offices, factories and numerous other businesses that are located in this port city.

For years, the state of two approaches has terribly impacted on the highbrow residential areas like Apapa GRA, Beachland estate, and of course, the low income residential but hugely populated areas such as: Ajegunle and Ijora.

No matter the argument, the presence of petroleum products tank farms has brought untold hardships to residents, owners of businesses, motorists and workers in Apapa.

We recall that, in a bid to stem the tide of debilitating traffic into the port city of Apapa, the Federal Government constituted a task team headed (on paper) by Vice President; Yemi Osinbajo, but also had a former Commissioner for Transport in Lagos state; Mr Kayode Opeifa as the Vice Chairman, and the man-on-ground.

Whether or not Opeifa’s team succeeded is a matter for another day, but the general opinion of stakeholders is in tandem with that of the Minister of Works and Housing.

This takes us to the assurance that was given recently by Coordinating Director, Highway Construction and Rehabilitation, Mr Funsho Adebiyi, that the ongoing first phase reconstruction and rehabilitation project of the Apapa-Oshodi-Ojota-Oworonshoki expressway would be delivered in April.

He assured that the “bad days are over in Apapa” as the project being done under the tax credit scheme of the federal government by the Dangote Group was nearing completion.

He said that sections one, three and four of the project were almost ready and would be completed in April.

Gladdening as this may sound, we however take this promise with a pinch of salt. Promises such as this have been made and broken serially. We wish to be proven wrong, but we will remind the Director in April, if the roads have not been completed and the bad days which he assured were over, have refused to leave. We pray this does not happen.

Even though we also agree that fixing the roads leading to the two ports in Lagos is germane to the solution of the current bedlam on these roads, we candidly hold the view that, for the effect to be felt, there is a more compelling need to enforce the requirement for holding bays for empty container.

It is the corporate duty for of the shipping lines to provide spaces for respective empty containers. We are aware of the pressure that the Nigerian Ports Authourity (NPA) has been mounting on the shipping companies, but we dare say that a lot more pressure is needed to get these multinationals to do the right thing.

The losses on account of the traffic gridlock occasioned by the state of the roads, and other connected sharp practices have been monumental.

In November last year, Bloomberg magazine noted that the congestion outside and the problems within Nigerian ports were choking the country’s economy. It also noted that in the World Bank’s Trading Across Borders survey, which measures the time and expense involved in importing and exporting goods, Nigeria ranks 182 out of 190 countries, below Syria and Afghanistan.

The Lagos Chamber of Commerce and Industry also a few months ago lamented that Nigeria loses $19 billion annually, or about 5 percent of its gross domestic product, from the delays, traffic jams, illegal charges and insecurity that are increasingly prevalent at its ports.

Nigeria’s world renowned businessman, Aliko Dangote, at the same time last year decried the implications of the Apapa gridlock to the economy and other business concerns in Nigeria, saying that the situation was costing the country an estimated N140 billion in revenue weekly or more than N20 billion daily. He described the Apapa road gridlock as an embarrassment to the country, remarking that the state of the ports access roads affects businesses across the country.

It is our hope that the pains of the past years, the losses to businesses and others will end once the Apapa-Oworonsoki expressway is completed as assured by the top Government official.

As stated earlier too, the NPA should firm up its demands of the shipping lines for the holding bays.

The last hope appeared to be the electronic call up system that was introduced by the Nigerian Ports Authourity (NPA). Unfortunately, a combination of bad planning and sabotage has crippled the system that started well.

Everyone had thought that the e call-up was the master stroke, but events of the past few weeks have proven that the nightmare called Apapa traffic may still linger for months if not years to come.