The Convention of Business Integrity (CBi) says Nigeria has improved in its Corruption Perception Index (CPI) raking and has progressively declined to 24 percent in 2021. This is even as it noted that corruption levels are at a worldwide standstill. 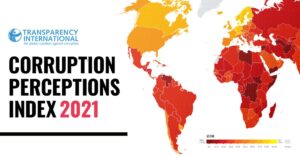 The Convention on Business Integrity (CBi) is an organization established in 1997 with the mission of promoting ethical business Practices, transparency and fair competition in the private and public sectors.

In a press statement by the Management of CBi which was made available to our correspondent noted that according to the Corruption Perception Index report for the year 2021 released by the Transparency International (TI), 31 countries have made no significant progress against corruption in the last decade. It also noted that two-thirds of countries score below 50, indicating that they have serious corruption problems, while 27 countries are at their lowest score ever.

The CBi says that: “While modest and incremental reforms are beginning to gain roots in the maritime sector, where the Maritime Anti-Corruption Network (MACN) in collaboration with the Nigeria Shippers Council (NSC), the Independent Corrupt and Other Related Practices Commission (ICPC) and Technical Unit on Anti-Corruption Reforms (TUGAR) and other port agencies through the instrumentality of the Port Service Support Portal (PSSP) housed by the NSC and the Project Steering Committee (PSC), the Nigerian Port Process Manual (NPPM) which led to the formation of the Port Standing Task Team (PSTT), such collective action initiative is not replicated in other sectors and such a model is recommended for anti-corruption reforms in the country. For anti-corruption efforts to be effective and bear results, preventive reforms involving all relevant stakeholders have shown itself to be more effective in the medium and long term”.

“This we strongly recommend to the Nigerian Government”, the statement concluded.

Transparency International (TI), a global movement working in over 100 countries to end the injustice of corruption also states that Nigeria featured prominently scoring 24 out of a possible 100 points and ranking an abysmal 154 out of the 180 countries ranked. It added that while countries like Kenya which was in the same bracket score with Nigeria in 2016 have progressively improved in its CPI index raking, Nigeria has progressively declined. According to the report, Kenya scored 26 points in 2016, it has currently moved up to 30 points in 2021, Nigeria on the other hand has moved from 28 points in 2016 to 24 in 2021 compared to Ghana that has remained relatively stable at 43 points.

“Nigeria has continued to lag behind on the CPI and found company among countries such as Myanmar, Lebanon, Kyrgyzstan and Guatemala.

“Despite the usual claim by Nigerian Government officials that the Government is making big stride in its efforts at curtailing corruption, the failure of the Government to take actions on Government officials indicted in grand corruption such as exposed in the Niger Delta Development Commission (NDDC) forensic audit as well as other revelations such as the Panama Papers, Pandora Papers and FinCEN Files reveals a lack of political will to comprehensively tackle corruption at its very roots. The culture of impunity that has emerged as a result of the failure of successive government to frontally tackle the scourge of corruption in Nigeria has continued to fuel the negative perception of Nigeria as an endemically corrupt country and this perception is what is revealed in the CPI ranking of Nigeria” it read in part.

The management of CBi however noted that these feats were achieved with a collective action initiative of some agencies which led to formation the Port Standing Task Team (PSTT) and recommended that such should be replicated in other sectors in order to effectively achieve anti-corruption reforms in the country.