The Nigeria Customs Service (NCS), Sokoto and Zamfara area commands, have confirmed the death of one person in a checkpoint accident which occurred at Asara village, Sokoto-Illela road. 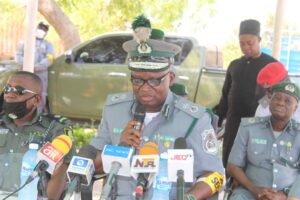 The command’s spokesman, Mr Balarabe Yusuf, who made this known in a statement on Tuesday in Sokoto, said the accident occurred on Sunday when the driver of a car, suspected to be conveying contraband items, refused to be searched at the checkpoint.

He explained that in an attempt to dodge the stop and search checkpoint, the driver was involved in a head-on collision with a vehicle coming in the opposite direction in which one passenger died and others sustained injuries.

The command’s spokesperson, however, refuted reports that four persons died during the accident, adding that a custom officer narrowly escaped being knock down by the vehicle.

He further said that a group of people who disguised as sympathisers later attacked custom officers at the checkpoint.

He said that in the process, the mob set one patrol vehicle and a vehicle belonging to one of the officers ablaze.

”In order to contain the situation from further escalation, the Customs Area Controller, Mr Abdulhameed Ma’aji, dispatched a reinforcement team who succeeded in restoring law and order in the area.

”The area controller has sympathised with the accident victims and appealed to the general public to always support the service in its effort to block all contraband goods coming into the country through the borders.

”The country is faced with security challenges and the NCS as an institution is doing its best to stop illegal smuggling and the situation needs collective efforts,” Yusuf said.

Shipping Position Daily had earlier reported that an angry mob, on Sunday set ablaze two vehicles belonging to officials of the Nigeria Customs Service (NSC) in Sokoto state, after four persons were killed in a road mishap that involved three commercial vehicles.

The accident occurred at a checkpoint mounted by personnel of the service, Asara unit, Illela border command.

The affected vehicles reportedly crashed while trying to evade a stop and search by the customs officials at the checkpoint.

“One of the drivers was carrying goods like rice and vegetables from the Illela border and eventually ran into a customs checkpoint located at Asara village,” a witness revealed.

“They (customs) obstructed the driver in a bid to stop the vehicle for a search and that caused the driver to lose control. The car ran into an oncoming vehicle and had a head-on collision while the one coming from the back crashed in between the two.”

The development reportedly angered the nearby villagers who set ablaze the vehicles of the customs officials.

Subsequently, soldiers were drafted to the scene to prevent further attacks on the customs’ facilities in the area.

The injured persons were taken to Gwandabawa General Hospital for medical attention.

Tahir Balarabe, customs spokesman in the state had earlier described the incident as “unfortunate”.

Balarabe said the officials were only carrying out their duties by preventing the entrance of contraband into the country.

“It is unfortunate that the mob carried out an attack against our men who were only trying to prevent some suspected smugglers to move contraband into the country’s shore,” Balarabe had said.