The Comptroller General, Strike Force Unit of the Nigeria Customs Service, said the agency impounded some unregistered and fake drugs brought into the country through the seaport. 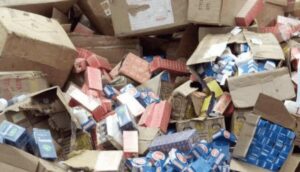 He said this at the unit while showing journalists the seized items.

Also speaking, the Coordinator of the unit, Deputy Comptroller, Ahmadu Shuaibu, said the unit also recovered N426.4m on cargoes that were under-declared at the port.

Read Also: FG To Re-Engineer The Economy Through Transport- Minister

According to him, the items seized were 575 bales of second-hand clothing, 1,440 cartons of supermarket goods, 664 cartons of drugs without NAFDAC number, 530 cartons of foot wears and 1,600 bags of foreign parboiled rice.