A female cadet from the U.S. Merchant Marine Academy in Kings Point has alleged that she was sexually assaulted by an engineering supervisor during her Sea Year training in an account submitted to Maritime Legal Aid & Advocacy. 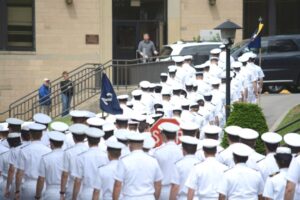 “He was creepy, made romantic passes at me, and made crude and demeaning comments about me in front of other members of the engine department,” the account read. “It was a difficult work environment, to say the least, and not what I had expected Sea Year to be like.”

After around 50 days at sea, the ship pulled into a Middle East port where the officers purchased “a lot of alcohol,” according to the cadet. She said she was pressured to drink alcohol by older men and supervisors on the ship.

The cadet said her male sea partner enjoyed drinking and she felt additional pressure to fit in, despite not having had any alcohol prior to arriving at the academy.

“As soon as I arrived the engineers began forcing shots of liquor on me and my sea partner,” she said. “They were like animals, drinking straight out of the bottles of liquor, doing shot after shot, being extremely annoying, yelling and laughing and making a lot of noise, and practically shoving shots down our throats.”

As she continued drinking, the cadet said, her sea partner became sick and was taken back to his room. The cadet said she blacked out shortly after, taking roughly another 8 to 10 shots of alcohol. The next morning, she woke up naked in her bed with a massive hangover and noticed blood on her sheets.

“I knew immediately that I had been raped,” the cadet said. “I was a virgin and had been saving myself, and as soon as I woke up I could feel that I was very sore and knew exactly what had happened.”

The cadet said she had glimpses of recollection from the time she was blacked out, including the engineering supervisor on top of her and forcing her to kiss him and perform oral sex. She said the supervisor denied the incident and told her “no one is ever going to believe you.”

The cadet, now a senior, said out of the 50 women in her class, she knows of at least five that were raped during their Sea Year.

Merchant Marine Academy Deputy Secretary Polly Trottenberg and Acting Maritime Administrator Lucinda Lessley said in a statement that the cadet has their “unwavering support” and that while resources are provided by the academy after these events occur, it is important to prevent them from occurring in the first place.

“We have a zero-tolerance for sexual assault and sexual harassment at USMMA and in the maritime industry,” the statement read. “As we determine the appropriate steps required to increase and ensure the safety of our midshipmen, we pledge to listen to and work closely with the entire Kings Point community.”

U.S. Rep. Tom Suozzi (D-Glen Cove) and U.S. Sen. Kirsten Gillibrand (D-NY) also released a joint statement saying that steps need to be taken to not have any more incidents of sexual assault or harassment while cadets receive their training.

“We must ensure that incidents of sexual harassment and assault are reported and prioritized, and that every single cadet feels safe whether on campus or at sea,” the statement read. “We will continue to work closely with the Merchant Marine Academy to put systems in place to ensure timely and thorough reporting.”