On February 28, 2021, the Nigerian Ports Authourity (NPA) introduced what can be described as the game–changer for chaotic Apapa traffic. By the explanations that were given by the NPA, an electronic call-up system would be deployed to direct truck movement into Lagos ports of Tin Can and Apapa. 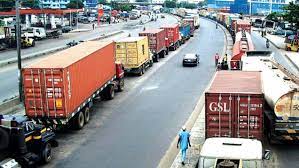 The NPA rested the implementation on five pillars, which were supposed to hold the operations of the electronic call up via the eto app.

Another pillar of the electronic call up is that, trucks must stay at designated parks; and to achieve this, some truck parks were selected. This means that, under the e-call up system, trucks that are not parked within the approved parks would no longer gain access into Lagos ports to pick cargo.

What this clearly meant was that, with the electronic call up, trucks should cease to park indiscriminately on Apapa roads and bridges. This is expected to eliminate the ugly perennial traffic gridlock that have been the lot of the port city; Apapa for so many years.

By the initial arrangement, there is no other fee to be paid by truck owners to access the port or park at the transit park.

At the onset of the e call up system in February, the NPA made it clear that consignees should drop empty containers at the holding-bay of shipping companies, from where the shipping lines are expected to be responsible for taking the empties into the port.

The electronic call-up system was expected to restore sanity within the Apapa port corridor by removing the daily traffic congestion.

This looked good on paper, and the arrangement actually worked in the first two days, then the unexpected began to happen, thus threatening the start-up success of the e-call up.

First, petroleum product tankers descended on the approach to Tin Can port from Mile 2, they queued up to load products at the tank farms, and in the process thinned out the main expressway. Second, by the following week, un-laden trucks also trouped out from somewhere around Mile 2.

And by later the same week, the approach from Ijora to Apapa ports had started seeing a long queue of flatbed trucks on the bridges.

Added to these, is the extortion that resurfaced on the Lagos ports corridor, where the various personnel of government agency who have been drafted to the ports corridor started compromising on a larger scale.

By its own admission too, the NPA at a time acknowledged that, there were over 30 checkpoints within the Apapa and Tin Can Port axis.

Even though the Lagos state government impounded many trucks for infractions, despair is gradually setting in on the part of all stakeholders, who had endured years of pains and business losses on account of the terrible vehicular traffic.

All that the NPA and TTP promised were not fulfilled, and that is why industry stakeholders say that the new system was only meant to rake-in money into the coffers of the government. As much as they acknowledged that there is a great improvement in traffic, they none-the-less criticize the abuse and extortion on the part of the security personnel drafted to the approaches to the ports.

Read Also:  Are you satisfied with the electronic call-up system of the NPA?

But by and large, the electronic call up has been a revolution. It has changed the traffic landscape of Apapa. No longer do we have articulated vehicles on queue on the approaches to Apapa.

Apart from the challenge of road construction between Mile 2 and Coconut on the approach to Tin Can port, the only challenge that we think the NPA should look into is the complaints of truckers about the operational modalities that are being rolled out periodically by

It is not late to still sit with stakeholders. Even though the NPA and the operators of the e-call up were confident that it would be a success, events in the last few months have shown clearly that, a lot still needs to be done.

It will be appropriate to take a second look at the promises made at the onset of the new system in February and how well the system has fared since its introduction.