One million seafarers, onboard more than half the world’s shipping fleet, have now benefitted from the ShipVisitor welfare app, which helps to provide continuity of care as ships and their crew move from port to port. Developed by the international charity Sailors’ Society, the app is used free of charge around the globe by 23 maritime welfare organisations, which provide chaplaincy support to seafarers far from home. 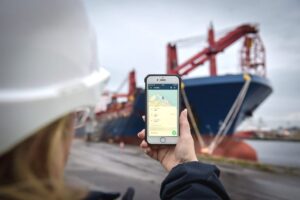 These organisations have used the app to log visits to more than 28,000 unique, individual ships – representing more than half the world’s shipping fleet. Sailors’ Society’s CEO Sara Baade said: “It is heartening to know that our innovative ShipVisitor app has now been used one million times. It means chaplains and ship visitors are responding to wellbeing and welfare support issues quicker than ever before.

“Sailors’ Society made this app freely available to maritime welfare organisations to facilitate greater continuity of care and it is making a real difference to seafarers’ lives.”

Using AIS data provided by MarineTraffic, the app enables chaplains and ship visitors to report their activities in real time and maintain a history of ship visits and support provided to seafarers. This information can then be used to provide ongoing care and assistance as ship and crew continue their voyage.

Since its launch in September 2015, there have been many examples of how the ShipVisitor app has improved welfare provision.

Marc Schippers, Sailors’ Society’s port chaplain in Antwerp, Belgium said: “The ShipVisitor app has been even more important during the Covid pandemic as most seafarers are not allowed shore leave.

“Last summer, a Filipino fitter had a back injury aboard a vessel. When it visited Southampton, the chaplain there recorded in the app that he had spoken with the fitter who wanted to get off in Antwerp for a proper hospital examination.

“I waited for the ship to moor in Antwerp and the fitter was able to get to hospital. He was declared unfit for work and was able to sign off the next day.”

The International Christian Maritime Association (ICMA) says the app illustrates how the wellbeing of seafarers can be improved by a ‘Better Together’ approach.

Jason Zuidema, General Secretary of ICMA said: “Ship visiting is a central activity of seafarers’ welfare providers. The ShipVisitor app is a dynamic tool that allows ship visitors to accomplish their work more efficiently but especially it gives them a way to give even better care to seafarers.

“ICMA is thankful to Sailors’ Society for its willingness to make this great tool available for our members around the world.”

ICMA member organisations worldwide are using ShipVisitor, with the latest, Bibla South Africa, going live on the app on June 7.

Cocaine Worth 10 Million Euros Seized In Port Of Piraeus