Dutch customs officers discovered three tons of cocaine stashed between barrels of banana puree at the port of Rotterdam. 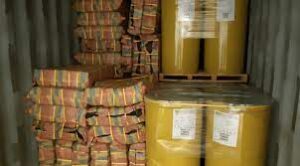 The drug haul with a street value of $266 million was discovered earlier this week in a container from Ecuador, prosecutors said on Friday.

It was one of the largest amounts of cocaine ever discovered at the port, authorities said.

The drugs have since been destroyed.

The container was destined for a company in Basel, Switzerland, which investigators believes that it likely has nothing to do with the smuggling operation.

Dutch customs officials said earlier that around 50 tons of drugs, destined for Dutch ports, were confiscated in the first half of 2021.

Around 22 tons were confiscated in the Netherlands itself and customs investigators discovered 28 tons abroad.