“They are deceiving themselves” - BoT Factional Secretary

Even as efforts are being made to reconcile the warring factions, the Corporate Affairs Commission (CAC), has issued a Certificate of Registration to the Taiwo Afolabi-led Board of Trustees (BoT) of the Association of Nigerian Licensed Customs Agents (ANLCA). 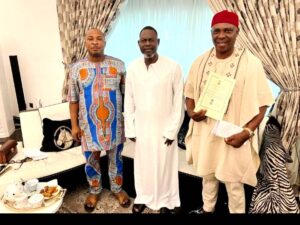 In a press statement by the acting national president, ANLCA, Kayode Farinto, he said the new certificate was secured after the expiration of the six years’ tenure of the former Board of Trustees (BoT) members whose tenure runs between February 2014 to February 2020 as enshrined in the association’s constitution.

But, in a swift reaction to the development, the Secretary to a factional BoT, Prince Taiye Oyeniyi said the development is laughable, saying that the board to which he belong is the authentic one.

He said, “the ANLCA, after the expiration of the six years tenure of the former Board of Trustees (BOT) members whose tenure runs (February 2014February 2020) as enshrined in the association’s Supreme constitution held an Annual General Meeting (AGM), as stipulated by the ANLCA’s constitution in December 2020 to elect new board members,

He added, “that at the AGM which was held in December 2020 at Owerri, the Imo State capital was duly attended by all ANLCA members, where the election of the board members were conducted both virtually and physical.

“At the end of voting nine prominent and duly registered members of ANLCA were elected into the board for a period of six years single tenure as contained in the ANLCA’s amended constitution.”

“It is worthy to note that since their election, the association has been painstakingly carrying out procedural processes of registering the new board members with the Corporate Affairs Commission (CAC). Am happy to announce to you that, on 7th September 2022, the ANLCA National Executive Committee working with the board and other members was able to get the CAC, registration of the new ANLCA board members.

“With the new development, all stakeholders are advised to disregard any other group or individuals that are parading themselves as ANLCA board members. While we don’t want to over-flog the issues in our association being perpetrated by expelled members of the association, we want to assure maritime stakeholders and indeed the general public and our members that the ANLCA leadership will never succumb to blackmail of mischief makers. But rather will follow the rule of law and stick to the Supreme constitution of ANLCA as a status symbol of all registered associations.

“The ANLCA NECOM is also aware of the expelled members and their cohorts circulating letters of introduction to Stakeholders for recognition. While we are still investigating the matter, we want to state that such letters do not and cannot have the backing of the ANLCA NECOM, but we promised to bring the impersonators to book in due course.

When contacted, the Secretary of the factional BoT, Prince Oyeniyi said procuring a CAC certificate for the Taiwo Afolabi-led factional board is like building something on nothing.

The whole drama leading to the emergence of the Afolabi board is fraudulent. We have taken the bold step to secure the association’s secretariat and it will remain under lock and key.

He insisted that the CAC acted in error, and must have been misled to issue the controversial certificate. He also claimed that there is a subsisting BoT in ANLCA, and that until their tenure expires, any one parading himself as member of chair of another board is acting illegally.

They are deceiving themselves and its laughable”, he declared in a telephone conversation with our correspondent on Friday.