The EU and UK are going to ban ships transporting Russia’s oil from seeking and receiving insurance, per reports, in what analysts refer to as the greatest blow so far to Moscow’s efforts in funding the war in Ukraine. Per the agreement, ships transporting Russia’s oil will be no longer be capable of taking out insurance at the Lloyd’s of London market, citing European and British officials, the Financial Times informed on Tuesday. 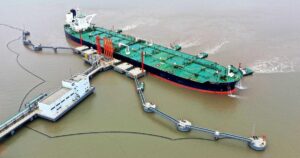 The insurance ban is likely to be placed in six months, per reports from the Wall Street Journal. The European Commission refused to comment while the UK government has not responded to requests for comment.

Lloyd’s is a global shipping insurance major, and analysts have said that such a move can result in a sharp drop in the transport and sale of Russia’s oil. Insurance is crucial given the significant value of oil shipments. The EU had banned insurance on Iran’s oil as part of sanctions a decade back. That had led to buyers shunning Iranian exports.

Sassan Ghahramani who is associated with SGH Macro Advisers mentioned in his note on Tuesday that the Western ban on insuring tankers loaded with Iranian oil was the most effective measure in taking a significant part of the Islamic Republic’s clandestine oil exports off markets.

It comes as part of the EU’s sixth round of sanctions against Russia since Putin’s forces invaded Ukraine in February. On Tuesday, the 27-member bloc agreed on a ban to slash imports of Russia’s oil by about 90% by the end of this year. However, a leading economist has suggested that the insurance ban will be a stronger weapon.

The moves can add pressure to the oil market and intensify the economic issues for Western economies that are struggling with inflation. Brent crude oil has risen approximately 50% since the start of 2022, owing to the Ukraine war and subsequent sanctions. The rate hit $125 per barrel on Tuesday when the EU declared an import ban, however, cooled to trade at about $117 on Wednesday.

Russia is the world’s biggest exporter of oil and the second-largest crude oil exporter, per IEA figures. Despite the stringent sanctions in place, Putin could prevent an economic crisis, thanks to the rising energy prices that delivered revenues derived from the exports of oil and gas soaring.

Lloyd’s did not comment on reports directly, but a spokesperson said that Lloyd’s is supportive of and remains focused on the delivery of a global sanctions regime against Russia, which indicates that Russia’s invasion of Ukraine is not acceptable.