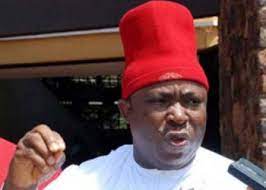 Eneh said he decided to join APC to wrest power from the PDP and connect the state to national politics.

He made the disclosure at his Enugu residence on Wednesday, expressing confidence in the ability of the state APC Chairman, Chief Ugochukwu Agballa, to turn things around for the party in the state.

According to Eneh, his supporters and Agbudu Ward in Udi LGA, where he comes from, are in agreement with his defection.

More than 200 members of APC led by Mr B.N. Nebe, pledged their loyalty to Agballa’s leadership at the event.

The APC member were said to have belonged to another camp of the APC before then.

While welcoming the former director-general and the party members from the other camp, Agballa thanked them for their decisions.

He described Eneh’s defection and pledging of loyalty to him by the others as an indication that APC was alive in Enugu State.

He called on others residents of the state to join APC which, he said, was on a rescue mission.

Agballa said that ÀPC was committed to taking over Enugu State Government House (Lion Building) in 2023.

“We need to occupy the Government House because it is the party that can achieve an Igbo presidency come 2023. To achieve all of these, we need all your support.

“Time has come for us to say no to political monopoly. You are the ones who can help us achieve that. We have a big party that can accommodate everyone,” Agballa said.

A former Speaker of the Enugu State House of Assembly, Chief Eugene Odo, in his remarks, praised Eneh and those who pledged loyalty to Agballa, for the decisions.

Odo said that the national working committee of the party had approved Enugu State’s congresses, and urged the state executives of the party to carry all members along.