Home » News » Importer Arraigned For Over N264m Fraud In Kaduna

Importer Arraigned For Over N264m Fraud In Kaduna

The Kaduna Zonal Command of the Economic and Financial Crimes Commission (EFCC) has arraigned one Mohammed Sani Dàuda alongside his company, MS Seven Nigeria Limited, before Justice Darius Khobo of Kaduna State High Court on a two-count charge bordering on obtaining by false pretence. 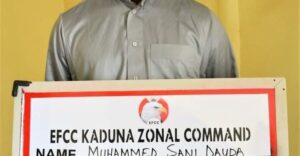 In a statement issued on Thursday, the EFCC said Dauda was arrested by the EFCC following a petition alleging that sometime in August 2021 he approached the complainant, claiming that he was into the importation of luxury cars from the United States of America.

He allegedly convinced the complainant to patronize him.

The petitioner subsequently deposited the sum of N70, 000,000 (Seventy Million Naira) into the company account of the defendant, for the purchase of a Mercedes Benz S-class 2021 model.

According to the EFCC, the complainant said after a while, the he again paid another N194,128,500.00 into the defendant’s company’s account domiciled in another bank for the purchase of a Mercedes Benz G-Wagon and a Rolls Royce.

He further stated that after the payments were made, the defendant became evasive and efforts to reach him to either get the vehicles requested or have a refund became futile.

Count one of the charges reads, “that you, Mohammed Sani Dauda (being the Managing Director and owner of MS Seven Nigeria Limited) between August and September, 2021 in Kaduna, Kaduna State within the jurisdiction of the Honourable Court, dishonestly misappropriated certain property, the total sum of N170,000,000 (One Hundred and Seventy Million Naira) belonging to one Musa Yakubu and thereby committed an offence contrary to Section 293 of the Kaduna State Penal Code Law, and punishable under Section 294 of the same Law”.

The defendant pleaded not guilty to the charges. Consequently, the prosecution counsel, N. Salele asked the court to fix a date for the commencement of trial. But the defence counsel, Maxwell Kyon urged the court to admit his client to bail.

Justice Khobo granted the defendant bail in the sum of N 5,000,000 with a surety in like sum, who must be a resident of Kaduna and own a landed property with Certificate of Occupancy which shall be verified by Kaduna Geographical Information Service, KADGIS, and EFCC.

The EFCC says the case was adjourned till February 8 for hearing.