Truck owners under the aegis of United Truckers Advocacy Team on Friday decried incessant extortion of owners and drivers by some security operatives along port access roads in Lagos. 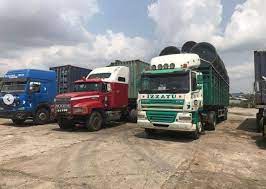 Leader of the group and Chairman, Association of Maritime Truck Owners, Chief Remi Ogungbemi, made this known in a statement he issued on Friday in Lagos.

He said the group embarked on a peaceful campaign against extortion on Thursday with visits to checkpoints mounted by security agencies along port access roads within the Lagos ports corridor.

He said members of the team visited the Ports Manager, Lagos Port Complex, Mrs Fumilayo Olotu and the Area Commander, Area B police command, Muhammed Dikwa, to register their complaints.

According to Ogungbemi, the advocacy team was inaugurated following series of complaints of extortion of truck drivers while accessing the ports.

He stated that the group had started working with support from the Nigerian Ports Authority (NPA) and the Truck Transit Park to checkmate the excesses of the traffic control managers.

“We have sat down and seen that it is not enough for us to complain.

“That is why we set up this advocacy team to let security agencies know that we have been hearing about extortion and it will no longer be business as usual.

“We are no longer comfortable with the extortion and we don’t want it to continue again.

“Our coming out is also to have a cordial working relationship with those that are designated to pass trucks on the roads,’’ he stated.

During the road show, Ogungbemi commended traffic officials at the checkpoint along SIFAX/Ijora Bridge for ensuring sanity and orderliness, but frowned at the continued extortion.

The Head of the traffic control team at the SIFAX checkpoint, a Superintendent of Police, Fidelis Ihiezu, while expressing appreciation for the visit, denied allegations of extortion by officials.

He said that some truck drivers fabricated false stories that they bribed security agencies to collect money from their bosses.

“Right from inception, we were warned about extortion; and the rules and regulations guiding all agencies here kick against corruption, except they are doing it on the other side.

“If anybody is caught, the person will go in for it; no agency here supports extortion because they pay us allowances and salaries.

“Extortion also comes in from the `Area Boys (street urchins).

“Before you park any truck, preparatory to move, they will collect N3,000 per day from the drivers until they move,’’ he said.

Ihiezu assured that the security agents would improve on their efforts to checkmate the activities of the ‘Area Boys’ extorting truck drivers within the area.

At the Lagos Port Complex, Mrs Olotu urged the truckers to comply with the terms of the e-call-up system and they would be bold to challenge any security agency over extortion.

Olotu assured the team that the NPA was putting measures in place to address issues of extortion.

One of the measures, she said, was the redeployment of security officials that had stayed for a very long time on the beat.