Home » ‘My Ordeal In The Hands Of Corrupt Port Officials, Others” – Moses Fadipe

‘My Ordeal In The Hands Of Corrupt Port Officials, Others” – Moses Fadipe

The National Coordinator of the Port Standing Task Team (PSTT), Mr. Moses Fadipe has lamented his ordeal in the hands of corrupt officials operating in the nation’s seaport and the Police. 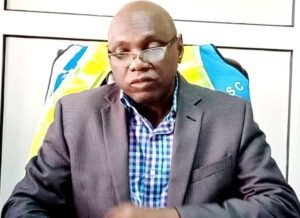 The Ports Standing Task Team (PSTT) was established by the Independent Corrupt Practices and Other Related Offences Commission (ICPC), in conjunction with the Directorate of State Services (DSS), Nigeria Shippers Council (NSC), and Nigeria Ports Authority (NPA) to entrench accountability and transparency, boost enforcement activities, as well as promote integrity in Nigerian ports.

Speaking with our correspondent, the PSTT boss lamented that he has on several occasions received threatening calls owing to the fight against corruption at the nation’s ports.

Even though he did not reveal the identity of the officials who attacked his team recently, Fadipe confirmed that, during a recent activity of the Task Team in Apapa, his group came under the attack of some ‘powerful forces’ operating around Apapa port.

Our correspondent confirmed from sources that, the arrest of some suspects who were involved in the abuse of trucking and container movement were intercepted by officials of the Port Standing Task Team for infarction and enriching themselves.

Fadipe confirmed that, “this is not the first time we are raiding this corridor, some of the suspects raided are currently at the ICPC facility and so far, they are making confessions on the people they work for and who they report to”.

“But these six suspects are regarded as untouchable. We have carried out about three or four raids before we raided them. We took our time to arrest these boys because we have an idea of who they work for”, he added.

According to him, corruption in the ports is a chain and that it goes beyond what the public can imagine.

He added that some officials of the PSTT were attacked and stripped naked two weeks ago by some of the corrupt elements operating in the nation’s ports.

“We already have the names of these ‘Camp boys’ who work for the Police, officials of the Nigerian Ports Authority, Lagos State Traffic Management Agency, LASTMA, and other government officials.”

Read Also:  NDLEA Intercepts N200m Worth Of Tramadol In Lagos

Also speaking on the ordeal of the PSTT, the Executive Secretary of NSC, Mr. Emmanuel Jime revealed that the lives of some of the council staff who are currently part of the Port Standing Task Team (PSTT) are in danger as a result of the fight against corruption at the nation’s ports

According to Jime, the council is engaged in a fight that no agency of government has ever been engaged in, adding that the council is fighting in a territory where the challenge is more than what anyone can ever imagine.

He confirmed that the life of the National Coordinator, PSTT of the agency, Moses Fadipe is in danger owing to the fight against corruption at the port

He said “We are engaged in a fight that no agency of government has ever been engaged in. We are fighting in a territory where the challenge is more than what anyone can ever imagine.

“The lives of Moses Fadipe and his team are in danger because they are fighting against a corrupt system that has been here for a very long time. Please, help us. Kindly help us shine a light on happenings along the port corridor. We have to rid the port of the endemic corruption that has gone up to a level anybody can ever imagine”, he said.