Last Sunday, December 19th, 2021, the Executive Secretary/CEO of Nigerian Shippers’ Council, Hon. Emmanuel Jime, in his first official interface with the media carried out what can well pass for a self-appraisal of his almost six months in the saddle as the boss of the nation’s port economic regulator, who among other responsibilities, also superintends the developments of Inland Dry Ports (IDPs) located in different geo-political zones in the country. 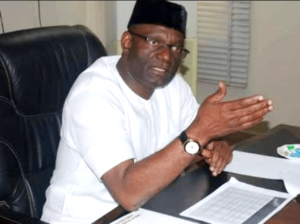 He told an elite gathering of senior editors that: “On my assumption of duty as the Executive Secretary/CEO of the Nigerian Shippers’ Council in July this year, I took time to acquaint myself with the internal administrative mechanisms of the Council, paid courtesy visits to sister government agencies and also familiarised with some stakeholders in the maritime industry and the media, which are key partners to the Council in executing our mandate.

“In line with our statutory mandate, we have been able to achieve some key advances, while some are in progress. In an effort to effect full digitalisation of the port operation process, the Council carried out an advocacy exercise for port service providers on importance of compliance with digitalisation of port operational process. Although most shipping agencies have achieved 99% digitalisation of their process, they still resort to use of manual processes in some aspect, this is due to the demand for hard copies of manifest by some government agencies. However, we have urged those government agencies to automate their processes to ensure full compliance in line with the current best practice.

“A standing committee composed of representatives of shipping line agencies and the Nigerian Shippers’ Council was established. This is aimed at maintaining a harmonious working relationship with the shipping companies. The committee meets regularly to discuss challenges encountered by the users/providers of the shipping services and then proffer solutions to challenges, arising.

“As a result of our collaboration with the Maritime Police Command, there has been a reduction in the rate of complaints received from the freight forwarding agents on the incessant issuance of detention alert placed on duly cleared containers by the officers of the Marine Police.”

Not done, Jime said the last few months have crystalised into the articulation of a new agenda for the Nigeria Shippers Council, which will “help guide the Council in the next four years.”

Generally, he said stakeholders should expect innovations in the operations of the NSC. These, according to him, will involve a new “software application to enable shippers obtain, from their handsets, shipping and logistics information, such as shipping news, trade statistics, port charges, rotation number of vessels, local shipping charges, terminal charges and lodgement of complaints.”

Specifically, and as part of the agenda, the Executive Secretary assured that the International Cargo Tracking Note (ICTN) will be re-introduced in a matter of weeks. He however assured that, the ICTN would be at very minimal cost.

“Time has now come for the full implementation of the International Cargo Tracking Note, we have so progressed with this particular effort that the promoters of this platform have already been identified, due diligence has also been conducted, we are now at the stage where we will in a few weeks from now announce the winner of that particular allotment and this ultimately begins the commencement of the implementation of the International Cargo Tracking Note”, he stated.

Jime also added that he was desirous of flagging-off of the operations of at least four Inland Dry Ports (IDPs) and at least two Vehicle Transit Areas (VTAs). This is in addition to the full take-off of an Empty Container Insurance Scheme or Guarantee Scheme, even as he added that, the Nigerian Shippers Council under his watch is poised to create fully equipped Border Information Centres.

Mindful of the Council’s all-important responsibility as the Economic Regulator of the nation’s seaports, Jime told the senior journalists that, the Nigerian Shippers’ Council will “strengthen regulatory framework and the need to develop a modus operandi for regulation; strengthen enforcement mechanism; standardise processes and procedure, resuscitate the Cargo Defence Fund and make it operational within one year, upgrade the Port Service Support Portal (PSSP) to make it more robust, as well as establish Export Desk at designated loading centres for export.”

The Shippers’ Council CEO also touched on the fate of the strategic National Transport Commission whose birth was truncated some time ago, when President Muhammadu Buhari refused assent to the Bill.

He assured the media executives that he would ensure that the NTC becomes a reality within his four years as the CEO of the Nigerian Shippers’ Council.

He confirmed that the Bill has already passed the House of Representatives, and awaiting concurrence by the Senate. “Before I leave office, the NTC Bill will be passed. Once it is passed, it remains how it will get to the President for his assent. He said the bridge would be crossed when the Bill gets there.

According to him, the once-passed Bill is what is needed to give the Shippers Council the teeth to bite as a regulator of the transport sector.