The National Drug Law Enforcement Agency has seized over 24, 311kg of heroin, codeine as well as Arizona and Colorado variants of cannabis in fresh drug busts at the Murtala Mohammed International Airport, Ikeja and the Tincan seaport, Apapa, Lagos. 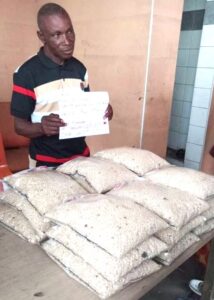 This happened barely a week after the Agency intercepted N6 billion worth of Amphetamine, popularly known as jihadists drug, at the Apapa port in Lagos.

The Director, Media and Advocacy for NDLEA Headquarters in Abuja, Femi Babafemi, in a statement on Sunday, revealed that on September 3, at the SAHCO export shed of the Murtala Mohammed International Airport II, two consignments containing 10.350kg heroin and 25.2kg cannabis from South Africa were intercepted.

“In series of sting operations between Saturday 4th Sept and Monday 6th Sept, in different parts of Lagos, four suspects were arrested including Mrs. Bello Kafayat Ayo who was picked from Shino Street, Palmgroove Area of the state,” the statement said.

“At the Tincan seaport, Apapa, narcotic officers intercepted a 40ft container loaded with 22,590 kilograms of Barcadin Codeine syrup on Monday 6th September following intelligence received from international partners on the container since May 2021. The container was also found to include 4,020.03kg of analgesic tablets and 47 cartons of insulated hot pots used to conceal the illicit drugs, all imported from India. Equally, on Friday 10th Sept, a consignment of Colorado weighing 17.5kg and hidden inside a Grand Caravan Dodge Vehicle shipped in a 40ft container from Montreal, Canada, was also intercepted and seized at the Tincan port.”

“In his reaction to the latest drug busts at the Lagos airport, Tincan seaport and other places across the Chairman/Chief Executive of the NDLEA, Brig. Gen. Mohamed Buba Marwa (Retd), commended the commanders, officers and men of the commands for their resilience and bravery. He said the series of arrests and seizures across the country further affirm NDLEAs zero tolerance for production, trafficking and abuse of any illicit substance, warning that drug dealers who are yet to have a change of heart must be ready to contend with the new NDLEA.”