The newly-deployed Controller of Customs in Seme Area Command, Comptroller Dera Nandi, has pledged to improve on the tempo of trade facilitation at the command. 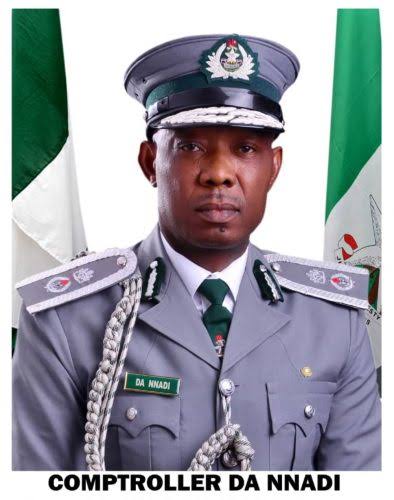 Nnadi made the pledge after a brief handover ceremony at Seme Krakpe office on Monday.

He described Nigeria as a strategic economic player in Africa, adding that schemes like ongoing ECOWAS Trade Liberalisation Scheme (ETLS) and African Continental Free Trade Area (AfCFTA) would be explored for common good.

According to the new CAC, Nigeria’s economy is central to the West African sub region with its population of over 200 million has potential to contribute to the African continent through the AfCFTA regime.

He urged his operatives, sister agencies, border communities and travelers to comply with the law guiding trans-border trade all the time.

Nnadi said border communities had challenges that were not insurmountable.

According to him, there is need to cover infrastructure gaps to improve their standards of living and promote lawful sources of livelihood.

“Our responsibility is not only to Nigerians, but entire West Africa is of utmost importance. We are banking on everyone to encourage trade within the corridor.

“Sème border is supposed to be the gateway to the rest of the African countries.

“So, I hope we are all prepared to embrace the challenges as we look forward to maximizing it,” he said.

Ahead of the 2023 elections, he advised his officers to be polite to travelers and traders using the Seme corridor and be firm in curbing any form of lawlessness.

Nnadi said his experience and knowledge from previous assignments across the border and his academic exposures would be deployed to border administration.

The controller urged media practitioners and his personnel to always think of patriotism in whatever they were doing.

Nnadi promised to interact closely with traditional rulers and other members of the border area.

The controller urged the sister agencies working in the corridor to cooperate with him to achieve his objective of manning the border well.