The Port Harcourt Refining Company (PHRC) is soon to commence rehabilitation of its pipelines in readiness for resumption of production. 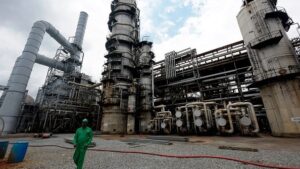 Mr Sheik Mohammed, the Executive Director, Project, PHRC, made the disclosure on Wednesday during the inauguration of Ekerekana 140 Market Stalls in Okrika Community, constructed by the company.

Mohammed, who did not disclose the contract sum of the project, declined further comments on Federal Government’s projection that the refinery would resume production by December.

According to him, as a responsible organisation, one person has to speak for the organisation and the Minister has spoken on that.

‘’We have to do everything possible to achieve the objectives of our leaders and that is our job and that’s what we are going to do,’’ he added.

He said that already, preliminary work for the pipelines rehabilitation was on-going, adding that the company was on the verge of awarding contracts for the cleaning of the pipelines.

Mohammed said that this would make the pipelines to be free from hydrocarbon and make them safe for the actual work.

He said resumption of petroleum products refining in the country had multiplier effects as it would give the nation energy security and value addition.

The diector added that it would provide jobs for Nigerians and give the nation good image.

On the market, he explained that it was relocated from the Pipeline Right Of Way in order to ensure safety of lives.

The director commended the company’s host community for demonstrating the ability to co-habit peacefully with the refinery.

Mohammed, however, said that the company would not relent in its obligations to its host communities as much as funds availability to it permitted.

He added that the company would always be open for dialogue, saying that it would discuss their complaint of bad road with them.

The Okrika Local Government Chairman, Mr Akure Tobin, commended the refinery management for its proactive effort in relocating the market.

King Ateke Tom, the Amayanabo of Ochiri Community in Okrika, explained that it was he who allocated the land to the refinery to build the market.

Tom, represented by Chief Tamuno Akalogbo, appreciated the company’s gesture while pledging to be fair to all communities concerned, in the allocation of the market stalls.

The king appealed to the company to reconstruct their dilapidated access road.

The Okrika Youth President, Mr Medford Charles, also commended the refinery for building the market and assured it of support and security of its ongoing projects.