Home » QUESTION OF THE WEEK: What Is The Pivot Point Of A Vessel

Manoeuvring is the ability of a vessel to turn towards the port or starboard side using the steerage force stemming from the turning of the rudder aft based on diverse requirements. 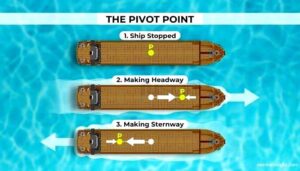 These requirements can be anything like maintaining or changing its desired course of travel, trying to steer clear of an obstruction underway, or approaching a port or dock.

Manoeuvring is a broad topic in naval architecture or vessel sciences and has been a matter of serious discussion and research for years. Many of us are also aware of the manoeuvring trials that take place to assess the turning abilities of a vessel.

-The pivot point of a vessel-

This is the same for vessels, where during stages of turning, the vessel’s turning moment acts about a definitive point of action, which lies on its centre-line, somewhat towards the fore-end or aft end. This kinematic point of action is known as the pivot point of a vessel.

In simple words, it can also be imagined as the point of rotation of a vessel. Now, since the hull is never a regular-shaped body, this pivot point is never the same as the Centre of Gravity, or C.G of the vessel, about which we have dealt with so much in the entire field of naval architecture or marine sciences.

Neither is it related to the Centre of Flotation or Centre of Buoyancy, which is related to the disposition of the vessel on the water surface and the overall hydrostatics associated with the hull.

However, the pivot point is more of a hydrodynamic parameter. The pivot point’s position primarily depends on the hull form, the speed, and the direction of the vessel’s motion. Though different, it is up to some extent on these mentioned points as well, the correlation being beyond the scope of this article.

Though we mentioned just a while back that it is a ‘fixed’ point, the fixity is only relevant for a particular scenario, and the location of this point may change again for a different speed-motion scenario.

For example, for all practical purposes, this point is located between 1/3rd and 1/6th of the bow when the vessel is moving ahead or has a forward component of speed and around 1/3rd or 1/6th of the stern when the ship is moving astern.

Now, let us discuss some instances to know more about the positions of the pivot point in detail based on the situation.

Most designers use the ratio velocity by length or V/L as a parameter for analysing the behaviour of the pivot points.

Read Also:  What Can Vessels’ Data Do For You?

When the vessel is stationary (V/L=0): There are no forces or motions associated with the vessel. The pivot point is almost close to or coinciding with the C.G, which is near the midship.

When the vessel moves ahead (V/L >0): The pivot point shifts forwards and is roughly located around 1/3rd or 1/4th distance from the bow, as mentioned.

When the vessel is moving backwards (V/L <0): The pivot points move backwards and, similarly, are located around 1/3rd to 1/4th of the ship’s length from the stern, depending on the speed.

The locus of the pivot point traced during turning is the trajectory of the circle created or tending to be created.