Naval officers on a frigate of the Tunisian Navy on Monday night rescued 100 irregular migrants whose boat was adrift 40 km from Zarzis port in southern Tunisia, near the Libyan border. 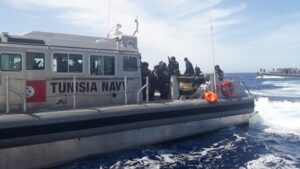 According to a statement from the Ministry of Defence, the migrants, 82 men, 10 women and eight infants, nationals of sub-Saharan African countries, said they had the day before boarded an inflatable boat from the Libyan coast to travel to Europe.

The rescue operation was carried out as part of the Tunisian Navy’s contribution to the regional search and rescue efforts at sea, in coordination with the Tunis Search and Rescue Centre and the Research Coordination Centre and relief from Rome, the statement added.

The survivors were taken to Sfax naval base in southeastern Tunisia to be delivered to the National Guard units for legal measures against them.