by Ade
in Featured, Health 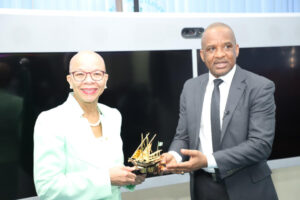 She gave the commendation during a working visit to the Director-General of NIMASA, Dr Bashir Jamoh, in Lagos on Tuesday.

Doumbia-Henry also noted that the policy had manifested in the number of women employed by the agency as well as those sponsored for capacity development in Nigeria and outside the country.

She said, “We at the World Maritime University have had a long, mutually, beneficial relationship with Nigeria and NIMASA in particular.

“Our visit is to further strengthen the ties between ourselves while exploring areas of future collaboration.

“I also wish to especially congratulate Jamoh for the gender inclusive nature of the agency, especially under his leadership.

“We have observed that in the number of female officers of the agency that are sent to the WMU for maritime studies.”

On his part, Jamoh said both parties had a longstanding relationship.

“Our continued relationship with the World Maritime University is informed by the agency’s commitment to professionalism, research and development as well as striving to attain global best practices in carrying out our responsibilities.

“This informs our choice of WMU when sending some of our staff to the institution for further training.

“We have a deliberate policy in line with the International Maritime Organisation to encourage more female participation in maritime,” he said.

Jamoh also said it was clear that NIMASA’s commitment to human capacity development of its staff remained firm.

“This in turn is bound to have a knock-on effect on the Nigerian maritime industry in that the level of professionalism would be improved upon,” he said.

The World Maritime University in Malmö, Sweden, is a postgraduate maritime university founded within the framework of the International Maritime OrganiSation, a specialised agency of the United Nations.