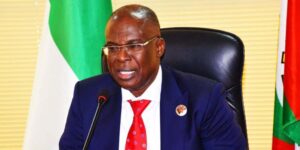 The minister said an annual investment of around $25 billion could bring electricity access to 759 million Africans who currently locked it.

Sylva said these at the annual Symposium and Exhibition of the Society of Petroleum Engineers (SPE) in Lagos.

Sylva, in a statement by his Senior Adviser, Media and Communications, Mr Horatius Egua, said the required investment represented only a small fraction of the multi-trillion-dollar global energy investment needed overall.

The United Nation Economic Commission for Africa (UNECA) in a report, noted that Africa needed about $40 billion worth of investments every year, to meet its energy needs.

According to the UN’s Department of Economic and Social Affairs, everyone in the world can have access to clean, affordable energy within the next nine to 10 years if countries modestly increase investments.

“The major question that is yet to be answered is whether Africa would benefit from an equitable share in global investment and growth.

“Despite the long-term and required drop in demand for fossil fuels, short-term demand and prices remain robust, providing strong commercial justification for their extraction and a need to smooth transition,” Sylva noted.

He said that despite contributing less than six per cent of world energy consumption and two per cent of total global emissions, there was a need for the continent to shift to cleaner energy use.

He reported the International Energy Agency (IEA), saying renewable energy was expected to support the growth of electricity from 20 to 50 per cent of total energy supply by 2050.

He said that the remaining energy demand that was impossible to electrify would require cleaner solutions, which could only come from natural gas – the closest ally to renewables.

Sylva, however, said in that context, a key decision and renewed impact was to persist in expanding the role and opportunities of natural gas towards recovery and shared prosperity for a sustainable Africa.

Sylva said with significantly untapped fossil fuel reserves, which could provide much-needed foreign direct investment and export revenue, Africa had the ability to play a leading role in the transition to a net-zero energy future.

According to him, the continent’s enormous resources can be harnessed, using clean energy technologies.

“And in line with the Federal Government declaration of the year 2021 – 2030 as the ‘Decade of Gas,’ we are taking steps to expand and develop the nation’s huge gas resources,” he said.

This, he said, would be through enhanced gas exploration, development and utilisation schemes which would lead to gas reserves growth, increased gas production, maturation of the domestic and export gas market, as well as gas flare elimination.

The minister called for a multiple pathways to the energy transition, to ensure that no country was left behind in the process of achieving net-zero emission by 2060

“We need to develop bankable projects to scale up access to funding and investment and adopt a mix of energy solutions to address the needs of each country,” he said.

The SPE annual symposium and exhibition had as its theme “Energy Transition In Africa: A Strategic Pathway To Net Zero.”