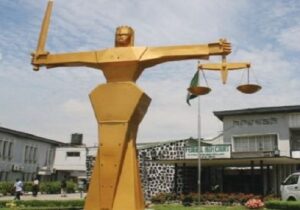 The defendant, who was arraigned on Nov. 10 before Justice Daniel Osiagor on a three-count charge of importation and sale of fake and unregistered drugs, however, pleaded not guilty to the charges.

After the plea of the defendant, the Defence Counsel, Mr Emeka Okpoko (SAN), had informed the court that his client was granted an administrative bail by NAFDAC, and urged to appear for his arraignment.

He also told the court that he had yet to file a motion for bail for the defendant, and so, would do the needful in no time.

The court had consequently adjourned the case till Nov. 15, for hearing of the bail application.

After the defence counsel had moved the bail application on behalf of defendant on Monday, the Prosecutor Mr Barthlomew Simon, raised objection, saying that the defendant might abscond.

In his response, the defence counsel reminded the court that the defendant had been granted administrative bail by NAFDAC, adding that he (defendant) had accordingly appeared in court for his arraignment.

He urged the court to grant the defendant bail in the interest of justice.

In his ruling, the judge granted the defendant bail in the sum of N10 million which, he said, must be deposited in the name of the Deputy Chief Registrar of the court.

He also added that the defendant must produce a surety on grade level 12 in the civil service.

Osiagor, thereafter, adjourned the case till Feb. 11, for trial.

In the charge, the prosecution alleged that the defendant, who resides at No. 2, Ezinwanne St., Onitsha, Anambra, committed the offence on Oct. 26.

It further said that the defendant imported 100g of Phini Tramadol, which was discovered to be unregistered and fake.

The prosecution said that the offence contravened the provisions of Sections 1(c), 1(1) and 3(1) of Counterfeit and Fake Drugs and Unwholesome Processed Foods, (Miscellaneous Provisions Act, Cap. C34, Laws of the Federation, 2004.

It added that the offence also contravened the provisions of Section 1(1) of the Food, Drug and Related Products (Registration) Act, Cap. F33, Laws of the Federation, 2004.