The factional Vice Chairman, Board of Trustees of the embattled Association of Nigerian Licensed Customs Agents (ANLCA), Mr Ozor Chukwurah, said the board has resolved to implement various court judgments on the crisis rocking the association. 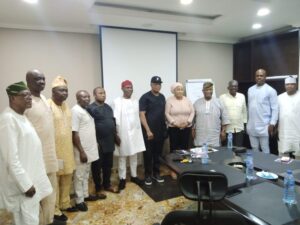 Chukwurah, who made this known at a meeting with the media in Lagos on Monday, spoke against the background of the locking-up of the secretariat by a faction of the association last week

The factional BoT Vice Chairman; Chukwura told the media that there were many court judgments against the Taiwo Mustapha-led faction, but said the board decided to keep mute, as they believe that ANLCA is one big family, perhaps the other faction may reason and change their attitude.

He however said with the recent development, the matter has got out of hand. He explained that the board had no choice but to implement all the judgements against the Taiwo Mustapha-led faction.

He said: “There are so many judgments that we have not been using, because we felt we are one family and kept talking to Mustapha and others, but now with the recent development, the matter has got out of hand”.

“Now the board has no other choice, but to have this meeting and resolve to implement all judged cases. We will pursue and let the court implement all the judgement given to us”, he said

He informed that in one of the judgements, Justice Rilwan Aikawa of the Lagos High Court on Oct. 11, 2019 gave an order restraining Mr Tony Nwabunike; the ANLCA president from recognising Taiwo Mustapha as the chairman of board.

He said that the judgement went on to say that Mustapha should stop parading himself as board chairman and should not be recognised by the Corporate Affairs Commission as a member of board because he was not genuinely registered.

“This issue of ANLCA has lingered so much and the board has taken steps to nip this in the bud. We have given everything to bring in peace, but they don’t want peace.

“We have constituted a panel to see how to bring peace to the association. Their members were part of the panel but they refused to implement the decision of the panel,” he said.

Chukwurah said that the board would also write to the police and advise them to stop supporting any type of illegalities from the other side.

“They have closed our office for five weeks and we have swallowed all insults, but this has to stop, their behavior is putting the association in a bad light, responsible and educated people behaving in this manner,” he said.

He stressed that when the association is in crisis ,the board takes over in that situation but there was no crisis because there are judgements.

Chukwurah informed that he visited the aggrieved members personally so that there would be peace, but said unfortunately, they don’t want to embrace peace.

Speaking on the issue of tenure elongation and amendment of the association’s constitution, Dr Kayode Farinto, Acting President, ANLCA said that the constitution was amended at an Annual General Meeting, even as he noted that association’s members were present at the AGM.

“The issue of tenure elongation was not our making, it was unanimous decision at the AGM and it was agreed upon,” he said.