The Nigeria Customs Service (NSC) Kebbi State Area Command, says it collected about N127 million in November from mostly import of goods into the country though Kamba border. 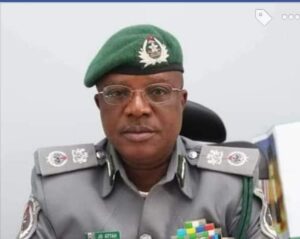 The spokesperson of the command, SC Nasiru Manga, made this known in a statement in Birnin Kebbi on Thursday.

He said that the command had continued to record seizures of second hand clothes, even as it intercepted items worth over N46 million.

Manga said that the achievement was disclosed by the Customs Area Controller, Mr Joseph Attah, while showcasing the seized items by the Command in the last month.

“Giving a breakdown of the Command’s activities, Attah said that the command generated a sum of N127.8 million as revenue from mostly import of goods into the country though Kamba border.

“On the area of anti-smuggling as patrol is intensified across Kebbi State, the command seized smuggled assorted items consisting of 303 bales and 94 sacks of second hand clothing.

“One unit of used BMW vehicle, 2,375 litres of PMS loaded in jerrycans and 58 bags of foreign parboiled rice of 50Kg each, among others with a duty paid value of N46.7 million were seized,” he said.

Manga reported Attah as assuring that his officers were ever ready to scuttle smugglers’ activities as the command was well- equipped with all the necessary logistics to strike at any time.

“From the record at our disposal, there is an increase in smuggling of second hand clothes in the last two months.

“You may recall that 139 bales were also seized in October. The smugglers cash in on the people’s demand for thick clothes such as cardigans in this harmattan season to smuggle these used clothes, not minding the health implication to the end user.

”We don’t know where the items came from or the last users of the clothes, their health status and so on.

“For the avoidance of doubt, second hand clothing falls under Schedule 4 of the Common External Tariff (CET) 2022-2026, importation of which is absolutely prohibited on health ground.

”Its smuggling contravenes Section 46 of Customs and Excise Management Act (CEMA) 2004 (as amended).

“It is our responsibility to ensure that no item that could negatively affect our people is allowed entry. We are determined to do just that,” he said.

Manga appreciated the management’s support through provision of logistics as it was determined to deal decisively with smugglers.

The PRO, however, called on all people of goodwill to support the state command by providing useful information for better service delivery.