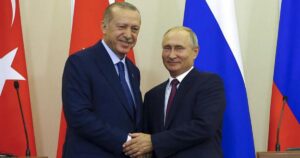 The export corridor aims to avert a global food crisis by guaranteeing the safe passage of ships in and out of Ukrainian ports, allowing them to transport tens of millions of tonnes of grain that had been blockaded by Russia’s invasion.

Putin on Wednesday floated the idea of limiting the arrangement, given it was delivering grain, other food and fertiliser to the European Union and Turkey rather than to poor countries.

The deal, signed by Ukraine, Russia, Turkey and the United Nations, also facilitates Russian exports. But Moscow says Western countries are not doing enough to ease logistical difficulties faced by Russian ships due to their sanctions.

“As Mr. Putin said, those ships (using the corridor) are going to either developed or developing countries. Maybe that’s why Mr. Putin doesn’t ship Russian products. Of course, in our meeting in Samarkand, we will now ask him to send Russian products through the corridor with ships,” Erdogan was quoted as saying.

“If Russian grain starts to arrive, we will send this grain, other products, all of them, until they reach these poor African countries.”

Erdogan and Putin are set to hold talks on the sidelines of a summit of leaders of the Shanghai Cooperation Organization in Uzbekistan on Sept. 15-16.

Erdogan has said Putin is right to complain that grain was going to wealthy countries.

The Istanbul-based coordination group that monitors the deal says 30% of cargo has gone to low and lower-middle income countries.

“There are many countries in a difficult situation, especially in Africa, which we need to embrace and send these goods to as soon as possible,” Erdogan was quoted as saying.