German customs said that it found 120kg of cocaine in a shipping container in the northern port of Hamburg, a spokesman said late on Tuesday. 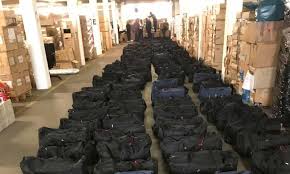 “The cocaine was hidden in a container full of broccoli,’’ the spokesman for the Hamburg customs investigation, Stephan Meyns, told dpa.

The narcotic drug was discovered in a shipment from South America during a routine check. Other media, including as the tabloid Bild, first reported the story.

“We assume that cocaine that arrives at the port is relatively pure,’’ Meyns said. But he noted that the investigation of the drugs has not been completed yet.

Expert estimate that the amount could probably be doubled by adding other substances. This means that the cocaine could have a street value totalling 12 million Euro (about 13.6 million dollar) or more.