London’s insurance industry is gearing up to cover Ukrainian grain and fertilizer shipments via a safe corridor, which could require up to US$50 million per insured cargo, industry sources said this week. 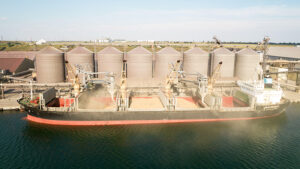 In effect, London’s marine insurance market has put the Black Sea region on its high-risk list, and insurance costs have soared.

For each voyage, ships will need separate layers of coverage, including for the cargo and the vessel itself, known as hull and machinery coverage. An additional fee is also charged by subscribers to enter such areas.

Lloyd’s insurer Ascot and brokerage Marsh have launched a mechanism for grain traders to provide up to US$ 50 million in cargo coverage for each voyage, according to Marsh’s global head of shipping and cargo, Marcus Baker.

“We’ve had some inquiries over the last couple of days, and we expect this to gain traction,” Mr. Baker explained, adding that US$50 million is more than enough for most grain shipments.

While there are issues to be resolved related to the corridor and ports, Baker explained that “the fact that we have this in place means that when something happens, we can move.”

Baker declined to comment on pricing but said the system would include a “no claims bonus” — a refund for a hassle-free trip.

The first grain ship to leave a Ukrainian port since Russia invaded on February 24, following a deal brokered by Ankara, Moscow and the United Nations, passed through the Bosphorus after the inspection ended last Wednesday. That same day three vessels loaded with corn left from Ukrainian ports in the Black Sea towards the Bosphorus. She was the first of a long list of another sixteen waiting depart.