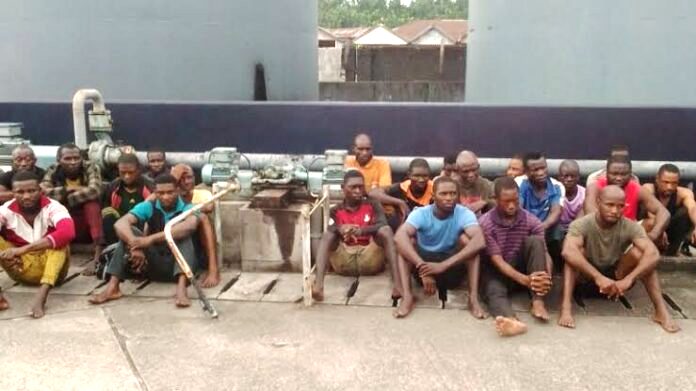 The Commander NNS Soroh, Commodore Patrick Effah, said at a press briefing on Monday in Akassa that the arrest was made on Dec. 6.

The commander added that the Navy traced the source of the crude oil to be four dug out pits in the area.

He said; “The discovered storage pit has been reported to relevant Oil and Gas Company for evacuation.

“The arrest is one of the numerous successes recorded by the Nigerian Navy in its ongoing Operation Quite Waters aimed at dominating Nigeria’s maritime environment towards creating deterrence to create secure economic activities to strive.

He said that the operation was in line with the Chief of the Naval Staff’s Strategic Directives to Naval Bases to curb all forms of maritime crimes within the nation’s waters.

“NNS SOROH has been relentless in identifying and arresting perpetrators of crude oil theft, illegal bunkering, and other maritime crimes.

“It is noteworthy that the Nigerian Navy remains unwavering in its drive to rid Nigeria’s maritime environment of all forms of criminalities.

“This drive can be justified by the recently commissioned vessels by the President and Commander in Chief of the Armed Forces.

“As I speak, some of the newly commissioned naval vessels and other vessels are at sea patrolling the nation’s exclusive economic zone.”

Effah said the Chief of the Naval Staff was currently at sea for Exercise Quit Waters.

He added that the arrest of MT TIS IV is one of a series of arrests recently made by the Nigerian Navy.

“Let me seize this opportunity to warn miscreants and intending economic saboteurs to desist from acts of criminality, as they have no hiding place.

“Note that the Maritime Domain Awareness facility of the Nigerian Navy is well equipped to detect and flag vessels engaged in all forms of maritime crimes within Nigerian waters and beyond.

“While warning criminals, I want to also thank other security agencies and stakeholders, more especially the Chief of Defense Staff through Operation Delta Safe and the Chief of the Naval Staff for the support given to the Base to enhance her operations.

“On a final note, let me reiterate that the Nigerian Navy remains unwavering in its drive to curb all forms of criminalities within Nigeria’s maritime environment,” Effah said.