Home » Featured » ONE Boxship Loses Containers In The Mid-Atlantic

ONE Boxship Loses Containers In The Mid-Atlantic

One Network Express is reporting that one of its Japanese registered container ships has suffered a container collapse during an Atlantic transit. The 146,778 dwt containership Madrid Bridge departed Asia early in December and was following a route through the Suez Canal and transiting the Mediterranean heading toward New York as its first port of call on the U.S. East Coast. The incident took place last Friday, January 7. 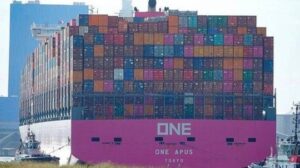 Cargo claims consultants WK Webster is advising clients, “It is not currently clear how extensive the collapse of stow is but it is reported that the vessel lost at least 30 containers overboard. We are currently seeking to establish the extent of the losses overboard and damage to cargo.”

The vessel has a rated capacity of 13,900 TEU and is managed by “K” Line Ship Management of Singapore for the network. Having entered service in 2018, it is one of 10 vessels, each 1,171 feet long, built by Imabari Shipbuilding Co. in Japan.

ONE did not provide a location for the accident, but AIS data seems to indicate the vessel was proceeding on a westerly course in the southern part of the Atlantic. It slowed and turned to the south raising questions of a possible storm and the vessel may have been slow steaming due to congestion at the Port of New York and New Jersey. The vessel appears to be moving west at a slowed speed and the AIS arrival date was changed from January 17 to January 20.

ONE said in its statement, “Our immediate priorities are to ensure the safety of the crew, the vessel, and the cargo on board. Delays to the vessel’s schedule are expected.” They also informed customers that investigations are currently ongoing and further information would be provided once available.

Safety experts have questioned routing and practices for the loading of containers as the primary contributors to the loss of containers from these new vessels. In 2020-2021 the container industry suffered several high-profile incidents including aboard vessels operated both by Maersk and ONE. The 138,600 dwt containership ONE Aquila diverted to Tacoma, Washington at the beginning of November 2020 for an unscheduled stop after having suffered a collapse of containers during its trans-Pacific crossing. Less than a month later, the ONE Apus suffered one of the industry’s worst container losses with over 1,800 boxes falling overboard in the Pacific and many more toppled and damaged. The vessel returned to Japan where it took nearly four months to recover.