About 11,000 workers of the Nigerian Railway Corporation have commenced a three-day warning strike, grounding operations at all rail stations across the country. 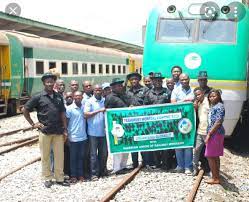 The NRC employees under the aegis of the Nigerian Union of Railway Workers on Wednesday vowed to halt all train operations nationwide including services on the popular Lagos-Ibadan, Abuja-Kaduna, and Warri-Itakpe routes today (Thursday).

Other notable routes to be affected by the industrial action include Lagos-Kano, Kano-Unguru and Aba-Port Harcourt, with thousands of railway passengers expected to be stranded at stations across the country while about N90m revenue is expected to be lost to the three-day strike.

Last week, the NUR, an affiliate of the Nigeria Labour Congress, threatened to embark on a three-day nationwide warning strike from November 18 to November 20, 2021 to press home their demands for improved welfare.

In a bid to avert the strike, the Minister of Transportation, Rotimi Amaechi, held a meeting in Lagos on Saturday with the union, but it was gathered that the meeting ended in a deadlock.

When asked by our correspondent on Wednesday if the strike had been shelved, the NUR President-General, Innocent Ajiji, replied in the negative and stressed that all railway workers would down tool as from 12am today (Thursday).

It was also gathered that government officials looked for the railway union leaders on Wednesday to serve a court injunction on the NUR not to begin the strike, but this was unsuccessful as key union officials went underground for the most part of the day.

The union leaders argued that a court injunction was not the solution against the planned strike.

“We are going ahead with the strike on Thursday. They have been trying to get us to serve us a court injunction. That is the kind of government we have in place now. However, we’ve not been served and so by early hours of Thursday morning our strike commences,” Ajiji stated.

On whether the strike would affect all the rail stations in Nigeria, Ajiji said, “Yes. The Abuja-Kaduna, Lagos-Ibadan, Warri-Itakpe, Lagos-Kano, Kano-Unguru and Aba-Port Harcourt, all those trains will stop. And even our offices will be closed down.

“And apart from those who operate the movement of the trains, we have local workshop workers, tracks men, admin department, everywhere will be closed down!”

It was learnt that the sector would lose about N90m during the three-day warning strike and that if the demands of the workers were not met, the union might declare another industrial action nationwide.

“We make over N360m monthly from the rail sector. We generate over N30m daily,” Ajiji said.

He added, “This strike will cause a drop in revenue for the sector. But that is not the issue. Rather the issue is that government should listen to our just demands.”

On whether the minister had reached out to the workers after the Saturday meeting that was deadlocked, the NUR president said, “He has not said anything till today.

“We will be at the stations by 6am on Thursday and this is because in Abuja, for instance, the first train moves by 7am. So we must be there by 6am to stop the train from moving.”