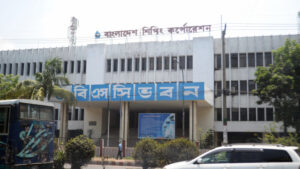 “We have already completed all the procedures to buy four large ships from China. We have also advanced discussion with South Korea. In total, we now have four development project proposals and two signed agreements regarding new ships,” he said while addressing the 45th annual general meeting of the corporation at the Boat Club in Chattogram.

“Our target is to add at least 20 ships larger than our existing ones by 2030,” the secretary added.

The Bangladesh Shipping Corporation started its journey with only two ships in 1972 and the number of ships steadily increased to 44 in the 1980s. However, the corporation sold most of the ships for their damages in the 1990s. It owned only two ships until 2018 before the inclusion of six new vessels.

Currently, the corporation, also a publicly listed company, has eight ocean-going ships in total. One of them got damaged in the Olvia port by a missile attack amid the Russia-Ukraine war this year.

Meanwhile, the annual general meeting announced a 20% dividend for FY22 for its shareholders as its year-on-year net profit increased by nearly 214% to around Tk229 crore in the fiscal year.

The total revenue of the corporation for the fiscal year was some Tk449 crore, about 64% higher than the previous year, and its operating costs increased by nearly 7% to over Tk171 crore. Earnings per share (EPS) also jumped to Tk14.80 from Tk4.72.

“In international cargo shipments, the Bangladesh Shipping Corporation is now a self-contained agency. The government is working to further develop it in line with the Sustainable Development Goals by 2030 and Vision 2041,” Khalid Mahmud said and added that the government has also a plan to increase three marine academies soon for creating more sailors.

At present, the country has five such institutes.

Referring to the incident of the attack on the MV Banglar Samriddhi in Ukraine, the state minister said, “It fell in attack due to a lack of cooperation with the Ukraine port. However, our prime minister’s diplomatic foresight helped bring back our sailors.”

The government has done everything for the family of the deceased sailor Hadisur, he added.