Russia’s foreign minister has traveled to Ankara for talks with the Turkish government on removing the blockade on Ukraine’s grain exports. 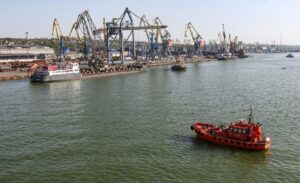 Following early talks between the Turkish and Russian defense ministers, Russian foreign minister Sergei Lavrov flew to Ankara on Tuesday to continue the discussion with his Turkish counterpart, Mevlut Cavusoglu. The deal under discussion would reportedly allow Russian forces to inspect inbound vessels for weapons, while Turkish naval forces would provide escorts. According to Kremlin spokesman Dmitry Peskov, the plan would be conditioned on Ukraine’s willingness to demine its coastal regions, removing a key impediment to Russian amphibious assault operations.

Ukraine’s representatives were conspicuously absent from the discussions, and Ukrainian president Volodymyr Zelensky told Interfax that his administration had not been invited to the talks in Ankara. In a statement, his ministry of foreign affairs made clear that it would reject any agreement that did not account for Ukrainian security interests.

“We appreciate Turkey’s efforts aimed at unblocking Ukrainian ports. At the same time, it should be noted that there are no agreements on this issue between Ukraine, Turkey and Russia at this time,” the Ukrainian Ministry of Foreign Affairs said. “Given the recent Russian missile strike on a grain terminal in Mykolaiv, we cannot rule out Russia’s plans to use such a corridor to attack Odesa and southern Ukraine. That is why effective security guarantees are needed to restore navigation.”

In addition to the blockade, Russian forces have been engaged in stealing Ukrainian grain from occupied areas and attacking silos and equipment in regions under Ukrainian control, according to U.S. and EU officials.

“It’s hard to view the Russian offers  in good faith considering how they are actively and intentionally destroying food products in Ukraine and exacerbating global food insecurity,” one U.S. official told Politico.

For their part, Russian diplomats have accused NATO nations of responsibility for restricting the flow of grain out of the Black Sea basin. In an address at the UN Security Council on Monday, European Council President Charles Michel pushed back on this argument, prompting Russia’s ambassador to walk out of the room.

“Let’s be honest: the Kremlin is using food supplies as a stealth missile against developing countries,” Michel said, speaking directly to Vassily Nebenzia, Russia’s ambassador to the UN. “The dramatic consequences of Russia’s war are spilling over across the globe, and this is driving up food prices, pushing people into poverty, and destabilizing entire regions. And Russia is solely responsible for this food crisis – Russia alone, despite the Kremlin’s campaign of lies and disinformation.”