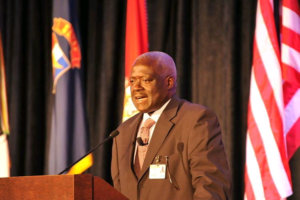 “Piracy has become increasingly sophisticated with the influx of small arms and light weapons in the hands of pirates and criminals on waterways and high on seas,” he said on Tuesday in Abuja.

Agwai was speaking at the launch of a Counter Piracy and Response project in the Gulf of Guinea.

The launch was organised by the Martin Luther Agwai International Leadership and Peacekeeping Centre (MLAILPKC) in collaboration with the UNDP.

He noted that the maritime domain had remained a critical route for human interactions and trade and brought about human interconnectivity and relationships between nations.

According to him, in contemporary times, sea interactions have brought about global economic prosperity and increased the relationship between nations and cultures.

“The maritime domain accounts for the movement of most global goods and services through different sea passages like the China Sea, the Strait of Singapore, the Gulf of Mexico, Gulf of Aden and Gulf of Guinea amongst others.

“Some of these sea passages have, however, continued to experience hijacks, kidnappings, robbery and piracy,’’ he said.

Agwai said also that reported cases of piracy and other maritime crimes in the Gulf of Guinea had continued to threaten the ease of moving goods and services.

He added that incessant pirate attacks had also resulted in increased maritime insurance costs, higher prices of goods and merchandise, including oil and gas resources.

There had also been the growth of regional illegal markets in clandestine goods and services, he noted.

According to him, costs associated with piracy and other crimes are ultimately passed on and borne by final consumers.

“The Gulf of Guinea which extends from Senegal in the west to Angola in the South remains a very critical socio-economic nexus between the Americas, Middle East and Asia.

“I cannot but state that the launching of the project would herald the Centre as a regional hub for Anti-Piracy Training toward mitigating the negative impacts of piracy in the Gulf of Guinea,’’ he said.

In his remarks, the Commandant, MLALIPKC, Maj.-Gen. Auwal Fagge, noted that piracy in the Gulf of Guinea had been discouraging foreign investment.

He said that weakened control of offshore areas had slowed deployment of blue economy and encouraged illicit freight and illegal fishing.

He said the Centre had embarked on research project with a review to proffering solution to piracy in the region.

He thanked the government of Japan, the UNDP and other partners for the launch of the project and for their continuous support.

The Director of Peacekeeping Operations, Naval Headquarters, Rear Adm. Abdulmajid Ibrahim, who also spoke at the launch, said the Nigerian Navy had continued to evolve strategies to tackle piracy in the Gulf of Guinea.

Ibrahim said that navy had been carrying out series of capacity development, especially with the acquisition of a new ship.

The rate of piracy in the Gulf of Guinea is believed to be one of the highest in the world.

According to the European Union Maritime Safety Agency’s factsheet, an estimated 1,500 fishing vessels, tankers and cargo ships navigate the Gulf of Guinea daily.

The International Maritime Organisation states that the number and severity of attacks on vessels by pirates in the region have a significant impact on global trade and the safety of seafarers in the region.