The Chartered Institute of Transport Administration of Nigeria (CIOTA) on Tuesday inaugurated a seven-man interim executive committee to take charge of its affairs in Ogun. 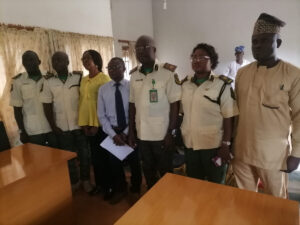 The Registrar/Secretary of CIOTA, Mr Rasheed Aiyelabegan, speaking at the inauguration of the interim executive members in Abeokuta, urged them to put in their best to achieve the council’s set goals in the state.

The interim exco will run the affairs of the council for nine months, after which a substantive election will be conducted for elected exco members.

Aiyelabegan noted that the CIOTA was introduced to Ogun following the contributions of Mr Seni Ogunyemi, the Corps Commander, Ogun Traffic Compliance and Enforcement Corps, also known as TRACE.

He said that CIOTA, however, had been in existence for 36 years and was formally known as the Institute of Transport of Nigeria (IOTA).

President of CIOTA, Dr Bashir Jamoh, who was represented by Ogunyemi, said that the council and TRACE had worked in synergy in repositioning its workforce and had achieved a milestone in the area of professional advancement.

“Our relationship has been quite cordial, long-standing and professional and this is evident from the number of members of staff who are today certified members of CIOTA.

“Our vision is to develop the transport profession, maintain professional standards, and improve the skills of transport practitioners, enabling them to deliver exceptional value for their organisations.

“The national body will continue to provide leadership in driving the institute’s professional responsibility for the development of its members and transport art and science,” Jamoh said.

Earlier, Ajayi, who spoke on behalf of other interim exco members, commended the effort and good works of their predecessors toward the progress and development of the association.

Ajayi, who is also a Deputy Corps Commander of TRACE, reiterated the commitment to coordinate the activities of CIOTA until when election of a substantive executive would be conducted in line with the constitution.

The interim chairman gave assurance that the interim exco would surpass the expectations of the council, adding that his team would not let the council down.