The Africa Centres for Disease Control and Prevention says over 253,000 people have died from COVID-19 in the African continent since the outbreak of the viral infection. 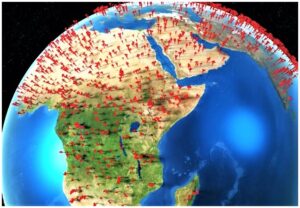 The Africa CDC gave the estimate in its latest update released last week.

It also disclosed that over 11 .5m cases have been recorded on the continent so far, with close to 11 million recoveries.

The continent, the Africa CDC added, had recorded 10,954,457 recoveries despite the huge fatalities recorded.

The World Health Organisation Regional Office for Africa says about 201 million people or 15.6 per cent of the population were fully vaccinated compared with the global average of 57 per cent.

The WHO in a statement posted on its website said thousands of clinical trials conducted in different parts of the world have shown that COVID-19 vaccines are safe and efficacious.

According to the WHO, studies on the performance and effectiveness of the vaccines are ongoing in Africa.

Head of the African Region Monitoring COVID-19 Vaccine Effectiveness network at WHO Regional Office for Africa , Dr. Jason Mwenda said, “COVID-19 vaccines were tested in controlled clinical settings where there were very strict rules for enrolling participants in the studies. So it is important for us to study how these vaccines perform in the real world.

“This is where vaccine effectiveness studies come into the “Vaccine effectiveness studies tell us things we do not yet really know about COVID-19 vaccines and are part of the process of ongoing scientific investigation. For example, what happens to vaccine performance when someone misses a dose, doesn’t follow the prescribed timing between a first and second dose or uses a different vaccine for the first or second doses?

“What happens if a vaccine is not stored in the correct conditions or is delivered off-schedule to far-flung areas? Clinical trials were conducted at a time when the world had yet to encounter the Beta, Delta or Omicron variants, so how are vaccines performing against these variants?”

Mwenda noted that there are some important questions that vaccine effectiveness studies all over the world have already started to answer, noting that vaccines continue to be effective since clinical trial data became available and disease patterns changed.

“According to him, to date, only three of the 272 vaccine effectiveness studies published worldwide have been in the African region.

“To address this gap, he said the WHO Regional Office for Africa established the AFRO-MoVE network in February 2021 with over 30 partners including the national institutes of public health, ministries of health and research institutions in 18 African countries.

“WHO is currently funding four of the 19 ongoing or planned studies in 14 countries in Africa, through a grant from the Bill and Melinda Gates Foundation.

“So far, results from a few studies show promising results. In Zambia, four vaccine effectiveness studies have been ongoing since June 2021 among different groups of vaccinated people, including health workers, and by analysing data gathered for the country’s respiratory disease surveillance system.

“In Zambia, vaccine effectiveness studies have shown that COVID-19 vaccines reduce the risk of infection, symptomatic infection, and the risk of dying while you are in the hospital during periods when Delta and Omicron variants were circulating,” Mwenda said.