The Lagos State Government has charged the Nigerian Immigration Service (NIS) to be vigilant as travellers moved to and fro the borders of the state amid the third wave of COVID-19. 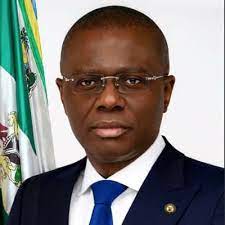 Sanwo-Olu said there was a need for the NIS to collaborate with the state government to curb the COVID-19 pandemic.

He said the government was monitoring what was happening around the states, especially around the third wave of the virus, hence, the need to work together.

”You are the gatekeeper, you are the goalpost that can work with our frontline health workers and our health authority workers to ensure that people that are coming in, obey our rules, conform with our COVID -19 protocols and nobody is above the law.

” More importantly is to be able to work with your men at the duty post, both at the air and as much as possible, the land border, so that we can nip the influx of COVID-19 in the bud.

”We know that it is usually imported and so we need to be very vigilant, we need to ensure that all of the protocols and guidelines as stated, especially in the airports are strictly observed and adhered to.

”This is so that we will not have any other major positivity that can change all of our modest efforts at curtailing the virus.

”We are not completely out of it, so we are monitoring, we are checking and we believe that working with you will also can help nip it in the bud ,” the governor said.

Sanwo-Olu reassured that the government would continue to support all security operatives in Lagos, so as to create a secured environment, especially around border posts

He also said the state government was committed in helping to build a befitting State Command office for the NIS in Lagos.

”We are looking for land of decent size that we can pass either around Ikeja, CBD here or somewhere on the Island. So I have instructed them in the Land Bureau to continue to search, so very soon, once we get the ones that are fully unencumbered, we will then pass it on.

”But we will be watching you, because if we give you something, we put a timeline to it, you don’t utilise it within that timeline, we will take it back.

”So, please make sure that the provisions, the funding that is required, you have also set it aside, so that we can create a win-win situation,” Sanwo-Olu said.

Earlier, Aliyu commended Sanwo-Olu for the unrivalled support his government had and was continuously giving to all security agencies in the state.

He said that such support had significantly improved the overall operational capacity of all security agencies in Lagos state.

”I am greatly appreciative of the frontline role you played as the Chief Incident Commander during and after the Public Health Emergency forced upon us by the COVID-19 pandemic.

”The hands-on management role you played did not only save Lagos, which was the epicentre of the pandemic, you also by extension, saved the country from descending into a cluster flux of epic proportions.

”I commend the governor for his doggedness and exemplary leadership displayed in managing the multi-layered challenges forced upon the state,” Aliyu said.