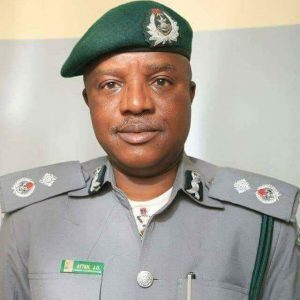 The Area Controller of the command, Mr Joseph Attah, made this known while briefing newsmen in Birnin Kebbi on Wednesday.

He said, “In compliance with the Federal Government’s directives aimed at ensuring food security in the country, the Command has strengthened vigilance at the borders to check any attempt to smuggle out food produce.

“To this end, the Command has intercepted an articulated vehicle fully loaded with bags of grains.

“The outbound Daf truck was intercepted by officers and men of the Command along Kamba-Bunza Road on Sunday, 15 May, and a physical examination of the truck revealed that it was carrying 800 bags of white sorghum with a Duty Paid Value of N6.2 million.

Attah also added that one trailer was intercepted by our vigilant officers conveying the same white sorghum along Kamba Road.

“But upon the driver’s failure to produce export documents, the truck was detained in our Headquarters and was later released on compassionate ground with the owner promising to return the product to their warehouse for domestic consumption.

“But upon the release of the truck, they went and trans-loaded the content into another truck which we intercepted as they tried to evade our officers’ checks. The owner’s repeated attempt to smuggle this food produce has failed with this interception,” he said.

According to him, the ongoing crisis between countries known for grain production has created an uncertainty in the global market.

He noted that it is imperative to secure the locally-produced grains to avoid plunging Nigeria into food crisis.

“In addition to putting our officers and men on high alert, we have undertaken stakeholders’ engagements across all our borders, enlightening border communities on the implication of exporting farm produce, especially grains,” he said.

Attah also revealed that the command had, from 1 May to 15 May, seized 209 jerricans of Premium Motor Spirits (PMS), 18 jerricans of Automotive Gas Oil (AGO), and a Daf Truck used as means of conveyance.

“This is in addition to 39 bags of foreign parboiled rice, five cartons of medicament and 10 bales of second-hand clothing, among others.

“The Duty Paid Value of all the items in the period under review is N27.6 million, and amount generated as fees from the auction sales of the PMS and AGO have been remitted to the Federal Government,” he said.

The controller expressed the command’s readiness to facilitate trade for stakeholders who chose to transact their business through the command following the reopening of Kamba border and the reactivation of the Command’s ICT.