Minister of Information and Culture; Alhaji Lai Mohammed, has listed some of the achievements of the President Muhammadu Buhari-led administration to include the launch of the Integrated National Security and Waterways Protection Infrastructure (also known as Deep Blue Asset). He said the project is aimed at managing, controlling and protecting Nigerian waterways towards the advancement of coastal prosperity, as the Gulf of Guinea in recent times has become a hotbed for piracy. 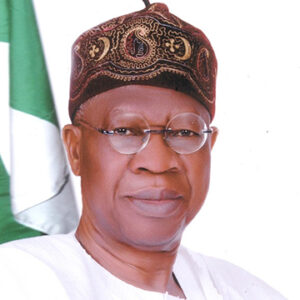 He also listed the transformation of NNPC, passage of the Petroleum Industry Act (PIA), economic recovery among others.

Mohammed said despite challenges that came with 2021, the administration made “tremendous” progress in fighting insecurity and growing the economy.

The minister said: “For the outgoing year in particular, the major challenge has been that of insecurity. In spite of this and the usual economic challenges, especially the dwindling resources available to the government, the Administration has availed itself creditably, as we will be demonstrating shortly.”

The Minister’s speech reads in parts:

“In view of the long list of achievements and time constraints, we will go straight into the highlights and then provide you with a fuller list. Let me admit straightaway that the year has not been devoid of challenges. For the outgoing year in particular, the major challenge has been that of insecurity. In spite of this and the usual economic challenges, especially the dwindling resources available to the government, the Administration has availed itself creditably, as we will be demonstrating shortly.

“As I said in my introductory remarks, our biggest challenge in the outgoing year is in the area of security. Despite the enormity of the challenge, our military has continued to live up to their billing. We owe them a debt of gratitude for their patriotism and sacrifice. We just can’t appreciate them enough, as you will soon see when I break down their achievements in the year under review.

“To keep our country safe, the effectiveness of the military was enhanced by the leadership provided by President Muhammadu Buhari and the unwavering commitment of the armed forces and its leadership. The procurement of modern platforms for the armed forces has also gone a long way in raising the level of their operational readiness and efficiency, in addition to boosting their capabilities. During the period under review, the Nigerian Army procured 160 MRAPS, 150 trucks and 60 APCs to improve its equipment holding. Various kits were equally provided for troops. This is in addition to the provision of accommodation for troops and the recruitment of over 10,000 personnel into the Army. The Nigerian Navy (NN), for its part, commissioned the FALCON EYE Maritime Domain Awareness Capability, the third locally-built Seaward Defense Boat, one helicopter, 4 inshore patrol boats and 90 Rigid Hull Inflatable Boats. Over 1,500 personnel were recruited into the Navy during the year. The Nigerian Air Force (NAF) took delivery of 12 Super Tucanos and 3 JF-17 Thunder Fighter Aircraft and other platforms with which it has conducted several Air interdictions, provided close air support to ground troops and destroyed several illegal structures and equipment belonging to terrorists, bandits and other criminal elements.

“In Foreign Trade, Nigeria witnessed dwindling performance in 2020, arising from trade restrictions on accounts of COVID-19 pandemic. Disruptions of trading activities driven by the pandemic further weakened the balance of trade witnessed in Q4 2019 in the subsequent quarters. Consequently, total imports in the first three quarters of 2021 rose by 57.13%, from N13.97 in the corresponding quarters of 2020 to N21.95 trillion.

“Similarly, total exports grew by 40.62%, which was N13.12 trillion in the first three quarters of 2021, compared to N9.33trillion in the corresponding period, an indication of improved trading activities although with a deficit position. Over the same period crude oil export improved considerably at N10.03 trillion, compared to N6.92 trillion, showing a growth rate of 44.93%, while Non-oil exports grew by 21.17% – from N1.19trillion to N1.44trillion over the same period.

“Inflation rate has continued to decline on a year-on-year basis since April 2021 when 18.12% was recorded. Looking at the trend, a declining rate was recorded from 17.93% in May to 17.01% in August, 15.99% in October and 15.40% November 2021. It is projected that proper implementation of the proposed 2022 project of N17.13trillion, and Medium-Term Expenditure Framework & Fiscal Strategy Paper 2022-2024 are likely to improve the performance of the economy.

“Also worthy of note is the transformation of the Nigerian National Petroleum Corporation (NNPC). The nation’s national oil entity has witnessed many changes and transformation through the decades. From its take-off on 1st April 1977 as a merger of the Nigerian National Oil Corporation (NNOC) and the Federal Ministry of Petroleum and Energy Resources, the NNPC – now re-christened NNPC Limited – has been undergoing the kind of transformation designed to re-invent the entity for greater efficiency and value creation. Yet, the changes and the unprecedented deluge of reformations in 2021 eclipse

“Definitely the most outstanding achievement in the transportation sector in 2021 is the flag-off of the commercial operation of the Lagos-Ibadan standard gauge rail line in June 2021 by President Muhammadu Buhari.

“The trains are currently conveying goods and services and reducing traffic and human pressure on infrastructural facilities on the Lagos-Ibadan highway. Then there was the ground-breaking ceremony for the rehabilitation and reconstruction of Port-Harcourt-Maiduguri Eastern Narrow Gauge Railway project and the Bonny Deep Sea and Railway Industrial Park. The 2,044-km Port Harcourt-Maiduguri rail line cuts across Rivers, Imo, Anambra, Benue, Enugu, Ebonyi, Gombe, Yobe, Adamawa and Borno. President Buhari also performed the ground-breaking ceremony of the Kano-Kaduna standard gauge rail line modernization project in July 2021.

“The Project is a continuation of the Lagos-Kano rail plan. It is the third segment, with Lagos-Ibadan as well as Ibadan-Kano as the 1st and 2nd segments, respectively. Then, the MOU for the construction of the US$1.959 billion Kano-Maradi standard gauge line was signed with the Portugues firm Mota-Engil Group. This is part of on-going Federal Government’s initiative to provide inter-modal means of transportation across the country as well as enhance trade between Nigeria and some African countries.

“President Buhari subsequently performed the ground breaking of the project, which traverses the major commercial centre of Kano and passes through other economic hubs of the country, including Kazaure, Daura, Katsina and up to the border town of Jibiya and the city of Maradi in Niger Republic.

“On completion, the project would promote import and export of goods from the Niger Republic and other countries in the sub-region through Nigerian ports. The country would earn revenue through expansion of trade and commerce, while the people of Niger Republic will benefit from the ease of transportation logistics at an affordable cost in their import and export business.

“The Federal Ministry of Transportation also launched the Integrated National Security and Waterways Protection Infrastructure (also known as Deep Blue Asset). This is aimed at managing, controlling and protecting Nigerian waterways towards the advancement of coastal prosperity, as the Gulf of Guinea in recent times has become a hotbed for piracy.

“What we have done here is to highlight the major achievements, hence this is by no means exhaustive. That’s why we are also giving you a list of 100 achievements of the Buhari Administration in 2021, Success is not measured by the number of challenges you face, but by how you tackle the challenges.

“This is what the Administration has demonstrated by tackling insecurity headlong while also growing and diversifying the economy. We want to most sincerely thank all Nigerians for their support and perseverance. We want to reassure the nation that President Muhammadu Buhari is determined to leave a legacy of a safe, secure and prosperous nation.

“We urge Nigerians not to relent in supporting our security forces, who continue to make sacrifices to keep our country safe” he said.