Home » Denmark’s Flawed Mission To The Gulf Of Guinea

Denmark’s Flawed Mission To The Gulf Of Guinea

On 24 November 2021, the Danish frigate HDMS Esbern Snare responded to intelligence of a piracy threat south of Nigeria. The ship’s Seahawk helicopter was dispatched, and its crew spotted a fast motorboat carrying weapons, ladders, and nine men. 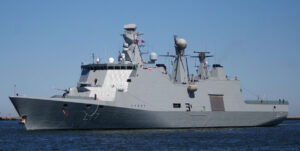 Nigerian authorities were notified but reportedly failed to respond.

By nightfall, the Danish ship was close enough to send special forces of the Frogman Corps in two rigid inflatable boats. Warning shots were fired near the suspected pirate vessel and the men responded by opening fire on the Danish soldiers.

In the ensuing fight, four men were killed, one fell overboard, and four were arrested, including one man with severe injuries to his leg. There were no Danish casualties. The suspected pirate vessel sank shortly afterwards.

Despite efforts by West African nations and foreign actors, the Gulf of Guinea remains the world’s piracy hotspot. The non-profit organisation Stable Seas reports that 99 percent of seafarers affected by kidnapping in 2020 were in the Gulf of Guinea.

Denmark embarked on its anti-piracy mission in response to pressure from the Danish shipping industry. Maersk, a Danish company, is one of the largest shipping operators in the region.

But the mission was launched with such haste that no protocols or agreements were made with the Nigerian government. This meant that no plan was in place if Denmark killed or captured pirates, who were likely to be Nigerian nationals.

The Esbern Snare drifted in international waters with four bodies and four prisoners. A security expert working in the Gulf of Guinea outlines the strange events that followed the incident. He prefers to remain anonymous.

When Danish authorities reported the engagement to Nigeria, they “locked the door”, he says.

Ideally, the Danish ship would hand the suspected pirates over to Nigerian authorities, but with lines of communication dropped and fears of human rights abuses — they might have faced a death penalty — three prisoners were given a rubber boat with enough fuel, food and water to take them ashore in secrecy.

Charges against them were dropped.

The injured pirate underwent surgery onboard but with concern for his health he was transferred to a hospital in Ghana and then flown to Denmark.

This was a challenge in itself, since Denmark had no interest in prosecuting pirates.

The dilemma was to risk the man dying, thereby tarnishing what little reputation the mission had retained, or transport him to Denmark meaning that he would have to face some sort of prosecution.

The messy predicament was laid out by Danish justice minister Nick Haekkerup, who said of the suspected pirates that: “they have no relation to Denmark, and the crime they have been charged with was committed far from Denmark. They simply do not belong here”.

In May of this year the Nigerian man, aged 39, was sentenced in Denmark to eight years in prison for endangering the lives of Danish soldiers.

There were specifically no allegations of maritime piracy.

The bodies of the four dead men were unceremoniously collected by an unmarked Nigerian boat near Lagos in what our source describes as a message to Denmark: “I don’t care about these guys. You are in my waters; you cannot do whatever you want”.

The Nigerian Maritime Law Association (NMLA) was first to raise concern over the incident. Whilst emphasising their support for any effort to rid the Gulf of Guinea of piracy, a statement read that the NMLA was concerned for “the sanctity of Nigeria’s sovereignty, application of the rule of law and respect of the protocols of engagement”.

Information obtained from a maritime security database places the Esbern Snare approximately 45 nautical miles (nm) south of Brass, Nigeria, at the time of the incident.

Under the UN Convention on the Law of the Sea, a country’s territorial waters extend 12nm from its coast.

Beyond that are international waters, although the country has rights to the seabed up to 200nm inside its ‘Exclusive Economic Zone’.

So there is no legal question: a warship’s legitimate role in international waters is to maintain the freedom of passage and suppress acts of armed robbery and piracy. Under the right to self-defence, the Esbern Snare played by the book.

The issue here is the proximity of the incident to Nigerian waters and the consequent perception of Denmark killing four Nigerian nationals with no prior agreement.

Even if the Esbern Snare was acting within its right, it was treading heavily on the toes of Nigeria and doing little to build a constructive relationship. The shady aftermath did not help the situation.

“Nigeria built a strong reputation as a regional power within West Africa in the recent past. But with the current spate of insecurity and piracy, this reputation is gradually fading”, according to Dr Daduku Peterside, former director of the Nigerian Maritime Administration and Safety Agency (NIMASA), following the incident.

“When small countries like Denmark provide security to the Gulf of Guinea, what does that say about Nigeria’s image as Africa’s economic giant?”, he added.

Nigeria has stepped up its response to piracy but given the economic interests of foreign nations like Denmark, the UK and Spain, it is inevitable that they get involved. To an extent, both local and foreign militaries are hamstringed: Nigerian forces are often ill-equipped; and foreign militaries are limited in the extent of their involvement outside of a state of war.

The challenge is exemplified by a handful of examples.

In January 2020, four Nigerian personnel were killed during an attack on the dredger Ambika in the Delta state, and the next month four were killed on a military barge in Bayelsa creeks.

In December 2021, the Esbern Snare’s Seahawk helicopter pursued a small boat carrying pirates and hostages until it entered territorial waters and vanished into the Niger Delta.

Jurisdictional complications aside, the situation is further complicated when we consider that piracy is largely a product of foreign involvement in the region.

Pirate groups mostly originate in the Niger Delta, an area that has suffered extreme environmental degradation at the hands of international oil companies operating since the 1950s.

According to the UN, pollution has devastated local livelihoods in farming and fishing, and 70 percent of people in the Delta region earn less than one dollar a day. It is well recorded by NGOs that local advocacy groups formed militias, and eventually pirate gangs, when their demands for local development failed to be met.

If the issue of piracy originates on land, then a unilateral reactionary approach at sea might not be the most appropriate solution.

It creates a dynamic in which a European power can carry out acts of strength in close proximity to a country that is held in subordination through its perceived economic and military inferiority.

If the goal of Denmark, and indeed the international community, is to end piracy in the Gulf of Guinea, then it seems a focus on constructive political dialogues could be a good place to start before taking on rash and controversial military interventions.