Lagos State government declared on Friday that the planned Fourth Mainland Bridge would be completed within four years.

It would cost 2.5 billion dollars. 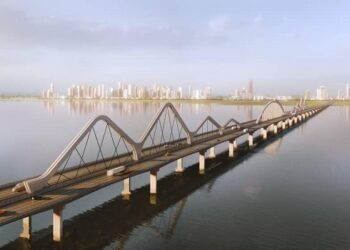 Special Adviser to Gov. Babajide Sanwo-Olu on Works, Mrs Aramide Adeyoye made the declaration in Ikeja at a media briefing to announce the preferred contractor for the execution of the project.

Adeyoye said the construction of the bridge would begin in the first quarter of 2023.

She said that Messrs CCECC-CRCCIG Consortium won the bid for the project while Mota-Engil (Nigeria and Africa), China Communication Construction Company and CRBC Consortium emerged as reserve bidders.

The governor’s aide said 52 bidders initially indicated interest in the project, out of which 32 were responsive.

She said that 15 out of the 32 bidders indicated further interest, out of which six met the criteria and were later pruned to three, before the winner was eventually picked.

Adeyoye said that 800 structures would be affected by the construction of the 37km bridge, which would start from Abraham Adesanya, Ajah, in Eti-Osa Local Government Area and terminate on the Lagos-Ibadan Expressway.

It would pass through Owutu/Isawo, Ikorodu and some parts of Ogun State territories.

She said that there was a framework to compensate owners of structures to be affected; assuring that all affected individuals would be adequately compensated.

Adeyoye said that the bridge would have three toll plazas and nine interchanges, adding that the funding was a partnership between the state government and the construction company.

The Special Adviser said that the agreement was a 40-year plan for the concessionaire to operate and maintain the bridge, as well as recoup investment on the project.

She urged residents to have confidence in the administration of Gov. Sanwo-Olu to deliver on its developmental promises.

The briefing was organised by the Ministry of Works and Infrastructure in partnership with the Office of the Public-Private Partnership (OPPP).

Special Adviser to the governor in the OPPP, Mr Ope George said that choosing the preferred bidder was a daunting task.

George said that the bidding process took 1,129 days after it was opened in 2019 when the present administration came on board.

He said that the bridge, when completed, would be one of the legacy projects of Gov. Sanwo-Olu’s administration.