The Minister of Works and Housing, Mr Babatunde Fashola, says ongoing investments in infrastructure development are the key needed for unlocking of the economy, for speedy development. 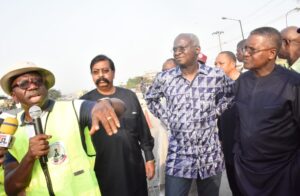 Fashola spoke on Thursday during an inspection of the Apapa-Oshodi-Ojota-Oworonshoki reconstruction project.

He was however silent on the completion date on the all-important road project.

The minister was accompanied on the inspection by the Special Adviser to Gov. Babajide Sanwo-Olu on Works and Infrastructure, Mrs Aramide Adeyoye, and her team.

The minister said the Buhari administration had achieved advancement of the economy through infrastructure development, citing creation of employment and market for small and medium enterprises at construction sites.

“Infrastructure is the key that unleashes trade and productivity. And without Infrastructure, you can’t drive trade and commerce, so let’s be clear about that. “The Apapa-Oshodi-Ojota-Oworonshoki Expressway is a major infrastructure asset for import and export business because it connects to the largest and busiest sea ports in the country,” he said.

He recalled how inaccessible the axis was in 2015 before the award of the Apapa-Oshodi-Ojota-Oworonshoki Expressway project nearing completion, which had changed the narrative.

Fashola said although there was better driving experience because of the reconstruction, people from various parts of the country had introduced lawlessness and disorder which must be cleaned up.

He vowed to restore sanity, law and order on highways, no matter whose ox is gored.

The minister said this was to stop abuse and damage to roads, bridges and other infrastructure in the Apapa-Oshodi-Ojota-Oworonshoki project axis and other Lagos State highways.

He also expressed anger at the activities of mechanics, panel beaters and other auto technicians at the Toyota bus stop via Oshodi, as well as the degradation of Liverpool end of Apapa-Oshodi-Ojota-Oworonshoki Expressway project alignment.

Fashola said the government would not be deterred by cheap blackmail, be it ethnic or religious.

The minister, who inspected beautification projects on all sections of the Apapa-Oshodi-Ojota-Oworonshoki project, said the park at Liverpool was aimed at restoration of the old recreational lifestyle in Apapa.

While inspecting new concrete key clamps built for fish traders under the bridge at Liverpool Waterside, Fashola warned the traders to avoid any activity that would degrade the redeveloped area or cause fire to the bridge.

Fashola, who spoke in Yoruba, urged the traders to collaborate with their market leader and Ministry of Works’ officials towards getting allocations of the new concrete stalls.

He asked the traders to vote massively for the ruling APC while explaining the infrastructure drive of the Buhari administration to them.

Earlier, the Director, Federal Highways, South West, Mr Adedamola Kuti and the Federal Controller of Works in Lagos State, Mr Umar Bakare, explained level of completion on various sections of the Apapa-Oshodi-Ojota-Oworonshoki project to the minister.

They said that the project, which begins from the Old Toll Gate and terminates in Apapa, would be completed between January and February 2023.

Adeyoye and Fashola’s team agreed on construction schedule at Second Rainbow Bus Stop area where the Alaba Interchange Bridge linking the Lagos-Badagry Expressway was landing on the Apapa-Oshodi-Ojota-Oworonshoki Expressway project.

The Federal and Lagos State delegation also carried out assessments and reached agreements on parks and gardens which were incorporated into the Apapa-Oshodi-Ojota-Oworonshoki project by the Dangote Group, contractors on the project.

The Alaba Interchange Bridge project is part of Section One of the ongoing Lagos-Badagry Expressway reconstruction project being handled by the Chinese Civil Engineering Construction Company (CCECC) and supervised by the Lagos State Government.

Earlier, Mr Edwin Devakumar of Dangote Group, contractors on the project, also gave a brief of the beautification, landscaping and other components of the project to Fashola.