A major incident has been declared in Gibraltar after the bulk carrier OS 35 that grounded following a collision with a LNG carrier earlier this week is now starting to split in two. 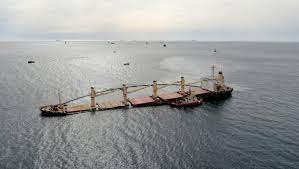 An update Wednesday from the Gibraltar Port Authority said the hull of the M/V OS 35 has broken but the two sections have not yet separated.

Boom has been placed around the vessel to help contain the release of any oil.

All 24 crew members and six surveyors on board have now been evacuated.

All operations at the Port of Gibraltar have been suspended in order to provide all available resources for the response.

All fuel remains on board the vessel. A substance leak believed to be lube oil has been reported and is reported to be contained within the primary boom, the Gibraltar Port Authority said in its update.

The Captain of the Port and the Gibraltar Contingency Council have now declared a Major Incident (MAJAX) under the Civil Contingencies Act which will free up more resources to respond to the incident. This includes all GPA service craft put on standby; all booms at the GPA’s disposal mobilized; two vessels deployed to begin corralling any oil that might spill from the vessel and leak from the primary boom; additional boom placed along the coastline at risk of direct impact; and the salvage master has been authorized by the Captain of the Port to re-board the vessel to collect information with the P&I on-scene commander.

Spain’s Salvamento Maritimo and the Port of Algeciras are also assisting in the response.

The salvage master has confirmed to the Captain of the Port that all fuel valves were isolated before the break occurred, the port authority said.

The Tuvalu-flagged OS 35 was outbound collided with the unladen LNG carrier Adam LNG in the Bay of Gibraltar on Monday. The vessel was anchored off Catalan Bay, on the opposite side of Iberian Peninsula, where it partially sank. A survey inspection of the vessel before it broke confirmed a gash amidships measuring approximately 10 meters by 4 meters on the starboard side. Its bulbous bow is submerged in the sandy seabed.

OS 35 is loaded with steel bars and carrying over 400 metric tons of fuel.

An exclusion zone is in place around the vessel.

The Adam LNG, which is registered in the Marshall Islands, sustained only minimal damage.