Home » Tanker Refloats After Running Aground In Egypt’s Suez Canal

Tanker Refloats After Running Aground In Egypt’s Suez Canal 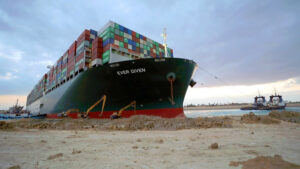 “The vessel, coming from Portugal, ran aground in the Suez Canal at about 7.00 p.m. local time (1700 GMT) on Wednesday and tug boats released it into its navigational course five hours later,’’ said George Safwat, spokesperson of the SCA.

He added that the vessel, Affinity V, had been blocking the southern section of the canal for a short period, noting that “traffic has returned to normal’’.

The incident took place in the same single-lane stretch of the canal where the Ever Given, a giant cargo ship, ran aground for six days in March 2021, causing disruption in global trade movement.

Since the freeing of the Ever Given, the SCA has been expanding and deepening the course of the canal, which is due to be completed in 2023.

Linking the Mediterranean Sea with the Red Sea, the Suez Canal was officially opened for international navigation in 1869.

It is serving as a lifeline for global seaborne trade since it allows ships to travel between Europe and South Asia without navigating around Africa.