The Lagos State Government says it is deploying a new vaccination strategy to prevent COVID-19 third wave in the state. 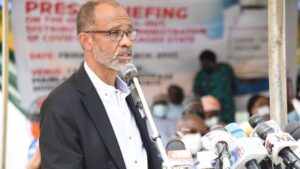 The state’s Commissioner for Health, Prof. Akin Abayomi disclosed this during a press briefing last week.

According to Abayomi, Lagos was deploying what he described as “a ring strategy” to ensure the third wave of COVID-19 is prevented in the state.

Explaining what prompted the vaccination strategy, the commissioner said, “Given the small number doses received, the Ministry of Health wishes to deploy some of these vaccines via a ring strategy.

“Ring vaccination controls an outbreak by vaccinating and monitoring a ring of people around each infected individual. The idea is to form a buffer of immune individuals to prevent the spread of the disease.”

Abayomi explained that the vaccination analysis in Lagos as of 20th April shows that the state has only vaccinated one percent of its population with the first dose, noting that only about 259,649 residents received the AstraZeneca vaccines.

This, he said, will enable the state to 28,000 people for the two vaccine doses.

Abayomi stated further that, over the past month, there had been a significant reduction in the number of confirmed cases of COVID-19 in Lagos.

State, but urged residents to be alert because of the serious ongoing battle against the viral pandemic by countries currently dealing with the second and third wave of the disease.

The commissioner said while the FG had banned non-Nigerians coming from India, Brazil and Turkey from entering into Nigeria, the state government will continue to take proactive steps to prevent the importation of new variants into the country.

“Lagos State Government is proactively setting parameters that will guide the management of passengers of interest from the listed countries,” he said.