The Minister of Works and Housing, Mr Babatunde Fashola, has described the newly constructed Mfum bridge as a “strategic infrastructure’’ that will enhance Nigeria’s participation in the African Continental Free Trade Agreement (AfCFTA). 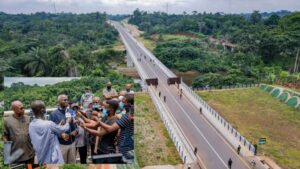 Fashola disclosed this while carrying out an assessment of the work done on the Mfum and Ikom bridges, both in Cross River.

The 408-metre- long Mfum bridge, which connects Nigeria to Bamenda in the Republic of Cameroon, was constructed by Nigeria in collaboration with Cameroon.

According to the minister, the bridge will facilitate trade in agro produce, as well as merchandise manufactured in Aba, Abia.

“This is a very strategic infrastructure that will take Nigeria to the future for many more decades and facilitate relations with our brothers in Cameroon.

“Nigeria is a signatory to the AfCFTA, so having this infrastructure here is exciting because it will increase trade, businesses and employment for our people.

While also inspecting the new Ikom bridge, constructed by the Federal Government, Fashola said one of the major objectives of the present administration was to expand, renew and upgrade Nigeria’s infrastructure.

“The old bridge had a very low headroom which prevented cargo vessels and huge trucks from evacuating goods from the Calabar Port. The new bridge which is 92 per cent completed would solve that problem.

“These infrastructure, which is consistent with Buhari’s economic recovery and growth plan, will enhance trade in the nation.

“They will also open up the trade route from Calabar to Maiduguri through Ogoja and Katsina Ala,” he noted.

The construction of the Mfum Bridge, undertaken by CGCOC Group, commenced on April 26, 2017 and was completed on March 31, 2021.

The project, which costs about 39 million dollars, was paid for equally by the Nigerian and Cameroonian governments through a loan from the Africa Development Bank (AfDB).

The Ikom bridge is a SUKUK project.