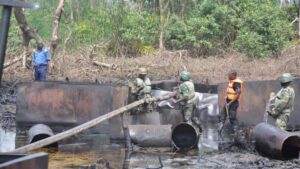 Acting Director, Defence Information, Brig.-Gen. Bernard Onyeuko, disclosed this while giving updates on the operations of the military across the country on Thursday in Abuja.

Onyeuko said the troops conducted and recorded successes in series of anti-illegal oil operations in several areas in Bayelsa, Rivers and Delta during the period.

He said the operations led to the discovery and deactivation of several illegal refining sites with a total of 21 ovens, 12 dugout pits and 58 metal storage tanks.

Onyeuko said that in the southeast, troops eliminated six members of the proscribed IPOB/ESN and arrested three members who were involved in the killing of a Divisional Police Officer in Imo.

He said the criminal was in possession of firearms and ammunition during the arrest.

“During the operations, one ESN commander was neutralised and another apprehended.

“Cumulatively, a total of six IPOB/ESN members were neutralised and 13 criminal elements arrested by troops and other security forces operating in the zone within the period.

“Other items recovered were 30 rounds of 7.62mm special ammunition, three daggers, and one locally-made double barrel pistol loaded with 10 rounds of cartridges,’’ he said.

The defence spokesman said that the armed forces and other security agencies remained committed to fighting all forms of criminality until sustainable peace was achieved.