·         Stakeholders call for annual event in his honour

The Nigerian Maritime Administration and Safety Agency (NIMASA) has revealed plans to immortalise the late maritime icon, Otunba Kunle Folarin by naming one of its newly acquired vessels after him. 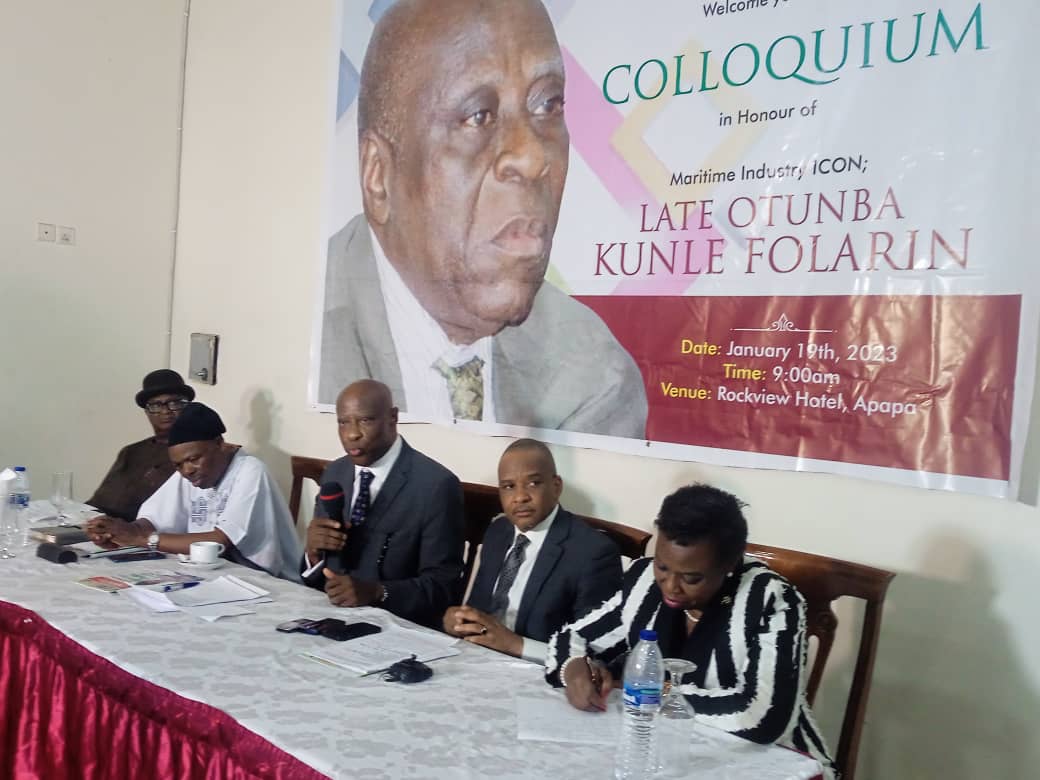 The Director General NIMASA, Dr. Bashir Jamoh revealed this on Thursday during a one day colloquium held in honour of the late maritime icon.

Jamoh who described late Kunle Folarin as a selfless man who is not given to acquiring wealth, informed that NIMASA just acquired three vessels and will name one of the vessels after him.

He described the late Folarin as a maritime encyclopedia who is willing and ready at any time to help the maritime sector irrespective of the situation.

While giving their goodwill messages, the maritime stakeholders at the colloquium encouraged the organisers to make the event an annual one in honour of the late maritime icon.

Speaking earlier, the Chairman of the colloquium, Capt. Emmanuel Iheanacho, described the late Otunba Kunle Folarin as a core professional, polished and a dignified and learned man whom he has known for over 50 years. He said the late Otunba Folarin has left a big shoe that will take time for the industry stakeholders to fit in.

He commended the maritime media for recognising his position and his role in the industry via the event held in his honour.

Also pouring encomiums on the late maritime icon, a maritime economist, Chief Chris Asoluka described him as a friend who was always there for the shipping community.

He said “The late Folarin wasn’t there for the money, but to give support to the shipping industry”.

On his part, the Chairman of the Association of Maritime Truck Owners (AMATO), Chief Remi Ogungbemi described him as an asset to the industry whose contributions will be greatly missed.

Speaking also a ship owner and President of the Shipowners Association of Nigeria (SOAN), Dr. Mkgeorge Onyung described late Folarin as a ‘bookman’ and resourceful personality, he said “Otunba Folarin was a great man and the industry is going to miss him a lot, he was a bookman and he will be greatly missed” he said. He also called for an annual event in his memorial.

A former president of NISA, Alhaji Aminu Umar described the late maritime icon  as a resourceful person, describing his contributions as timely and apt.

Also speaking a member of the Association of Nigerian Licensed Customs Agents (ANLCA) Hajia Bola Muse described him as a father figure who at everytime makes her believe the maritime sector is a place to be.

Also lending her voice to who the late maritime icon was to her, the Director General of Nigeria Chamber of Shipping (NCS) Mrs. Chimezie Azubuike, stated that the late Otunba Kunle Folarin charted a very good course for the industry stakeholders to navigate through.

Speaking earlier, one of the organisers of the event, Mr. Sesan Onileimo disclosed why the maritime media decided to honour the late icon.He said: “We decided to host this colloquium in honour of someone who interacted beautifully with the maritime media. From the youngest to the older journalists, we were all beneficiaries of Otunba Kunle Folarin’s wisdom.

“CVFF disbursement is one of the key issues at the moment in the industry and one that touches the heart of Otunba, when he was alive and that is why we decided to focus this colloquium on that.

“He was a resourceful person per excellence and we hope that this becomes an annual event in his honour”, he said.