Home » Tanker Fired on During New Gulf of Guinea Incident

Tanker Fired on During New Gulf of Guinea Incident

A new incident was reported on Monday in the Gulf of Guinea involving a laden oil tanker serving as a fresh reminder that while the number of incidents has declined dramatically, the threat of piracy remains in the region. 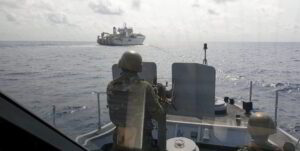 Details on the incident are incomplete, but it appears the vessel was able to take evasive actions with the joint British and French monitoring operation reporting the crew aboard the tanker were safe and that the vessel was continuing on its journey out of the region.

The cooperation center maintained between the UK Royal Navy and the French Navy, the Maritime Domain Awareness for Trade – Gulf of Guinea (MDAT-GoG) issued two alerts on December 12 to vessels operating in the area.

They reported that a skiff approached a tanker underway approximately 100 miles west of Equatorial Guinea. Shots were fired from the small boat but they did not attempt to board the tanker. Approximately four hours later MDAT-GoG was reporting the incident was over and the crew was safe.

Security analysts are confirming reports adding details that it was a laden Suezmax tanker. The vessel was reported to be southwest of the Kome-Kribi Marine Terminal in Cameroon and able to increase speed as the skiff approached. Several shots were reported fired toward the but the skiff never came closer than about 200 meters. Security analysts Dryad Global notes that this is the first incident in this location since a vessel was fired upon 20 nautical miles offshore of Bata in January 2022.

Unconfirmed media reports are linking the incident to the Greek-flagged Suezmax tanker Maran Poseidon managed by Maran Tankers Management. AIS data shows that the 158,000 dwt tanker departed the terminal off Cameroon on December 11 bound for the German port of Wilhelmshaven.

This incident comes just over two weeks after MDAT-GoG reported that a South Korean-owned tanker was boarded south of Cote d’Ivoire. The crew was detained while the pirate stole some of the vessel’s cargo and they also severely damaged the ship’s equipment. The Italy Navy assisted the vessel and stood by till a tow could be arranged back to Abidjan after the pirates left the vessel.

The latest incident marks the fourth in the past 30 days in the Gulf of Guinea according to MDAT-GoG’s tracking. On November 15, data shows that an unidentified vessel was boarded approximately 50 miles off Shebro Island in Sierra Leone. The crew and vessel were reported safe. The following day three men were spotted aboard another vessel in the Takoradi anchorage off Ghana. MDAT-GoG reports the intruders threatened the crew before leaving the vessel.

Security services have continued to maintain the warning for the region advising that vessels need to maintain their watch and be on the lookout for pirates. While the multiple efforts in the region have been successful in reducing the reports, they warn that the threat of piracy in the Gulf of Guinea has not been eradicated.