Two cargo vessels collided between the southern Swedish coastal town of Ystad and the Danish island of Bornholm in the Baltic Sea, the Swedish Sea Rescue Society said. 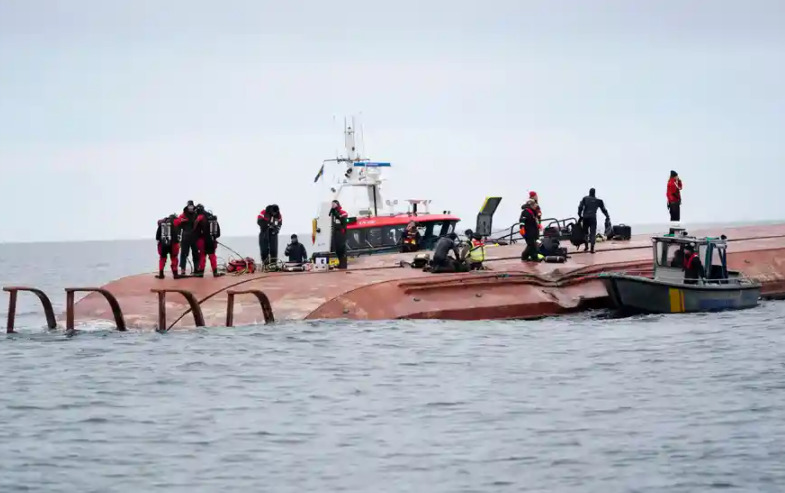 Following the collision, one of the ships, Karin Hoej, capsized. At least two of the crew members are reportedly still missing, and search operations are underway.

The sea rescue operation is led by the Swedish Maritime Administration. In parallel, the Swedish Coast Guard conducts an environmental rescue operation to prevent oil or other harmful substances from being released into the sea. There are currently no ongoing oil spills, Swedish Sea Rescue Society stated.

The Swedish Coast Guard has three units on site: the surveillance vessels KBV 314 from Malmoe and KBV 302 from Karlskrona and the aircraft KBV 501. Two more vessels, KBV 002 Triton from Gotland and KBV 034 from Malmoe, are on their way, both with oil absorption capacity.

At 9 a.m., KBV 314, together with the Sea Rescue Society’s Gad Rausing, connected the capsized ship to tow it aground, the authorities revealed. This is to prevent sinking and to enable divers to search for missing crew members.

A preliminary investigation into gross negligence in maritime traffic is being conducted under the direction of prosecutors, according to the coast guard. No further details were disclosed.

Scot Carrier, a cargo ship built by Royal Bodewes in 2018, is 90 meters long and has a 4,800 DWT, according to the data provided by the VesselsValue. The owner of the vessel is Scotline, a UK-based company operating short-sea shipping in the Scandinavian/Baltic market.

The other ship, Karin Hoej, is a freighter built in 1977 and is sailing under the flag of Denmark. Its carrying capacity is 492 DWT and its current draught is reported to be 1.7 meters. The ship’s length overall is 55.06 meters and its width is 9 meters, according to MarineTraffic.